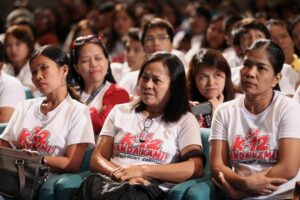 – Teachers, parents, students and other invited guests listen to the speech of President Benigno S. Aquino III as he delivers his message during the Department of Education’s event “Sa K to 12, Kayang-kaya, Sama-sama! A celebration of K to 12 Milestones,” marking the second year anniversary of Republic Act 10533 or the Enhanced Basic Education Act of 2013 also known as the “K to 12 Law” which was signed by President Benigno Aquino III in May 2013. The event was held at the Philippine International Convention Center in Pasay City on Friday (May 29). The K to 12 education program as envisioned by DepEd aims to produce high school graduates who have the competency to hold a job and be better prepared for college education and global opportunities. (MNS photo).

MANILA (Mabuhay) – A regional director of the Department of Education is facing graft charges before the Sandiganbayan in connection with the anomalous procurement of computers in 2008.

In a press statement, Ombudsman Conchita Carpio Morales ordered the filing of information against DepEd Zamboanga Peninsula director Walter Albos for approving the procurement of IT equipment and software worth P2,998,100.00 without public bidding.

A Commission on Audit report said that aside from lack of public bidding, the delivered equipment was not in accordance with the quantity and specifications indicated in the purchase order.

The investigation also revealed there was delivery of equipment even before an abstract of bids was issued.

The Ombudsman said that while the Commission on Audit later deemed that the questioned disbursement had been settled, “the interest of the COA is solely administrative, and its investigation does not foreclose the Ombudsman’s authority to investigate and determine whether there is a crime to be prosecuted for which a public official is answerable.”

It said the graft charge must be pursued as “there is nothing in the records that would prove that the Bids and Awards Committee participated in the procurement” as “the procurement was only upon the direction of respondent Albos.” (MNS)

Benefits and risks of Glutathione

Pinoys in US are outstanding immigrants