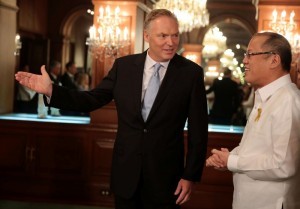 President Benigno S. Aquino III welcomes Kingdom of Norway Ambassador to the Philippines Erik Ferner during the presentation of credentials at the Music Room of the Malacañan Palace on Thursday (November 27). (MNS photo)

The DFA said Brende expressed hopes that the pursuit of peace in Mindanao would continue despite the recent tragedy.

For his part, Del Rosario thanked Brende for expressing sympathy to the victims of the Mamasapano bloodbath. The DFA chief also expressed appreciation for Norway’s role in the International Monitoring Team (IMT).

It is also the third-party facilitator for the peace talks between the Philippine government and the Communist Party of the Philippines-New People’s Army-National Democratic Front.

Del Rosario assured the Norweigan official that the Philippines will continue its efforts to fully implement the Comprehensive Agreement on the Bangsamoro, while “being fully committed to finding justice for the slain police officers.”

“This [assistance] has resulted in the continued recognition of Philippine-issued licenses and certificates by the European Union (EU), a requirement for Filipino seafarers for employment as officers in EU-flagged vessels,” the DFA statement said.

“With over 25,000 Filipino seafarers on board Norwegian-owned and -managed vessels, Minister Brende noted that it was in the common interest of both countries to continue efforts to achieve adequate progress in meeting STCW requirements,” it added.

Both foreign ministers also expressed satisfaction with the progress of the proposed free trade agreement between the Philippines and the European Free Trade Association (PH-EFTA FTA).

The two officials also agreed to strengthen cooperation in multilateral organizations, including mutual support of candidatures in the United Nations.

Norway is home to about 18,000 Filipinos and Filipino-Norwegians. (MNS)