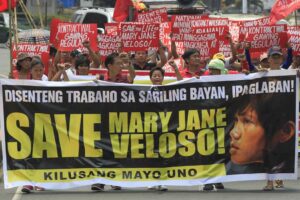 Migrant rights activists raise march with banners and placards in Manila on Tuesday urging the Philippine government to save Mary Jane Veloso, a Filipino migrant facing execution in Indonesia for drug charges. Indonesia’s Supreme Court upheld its ruling and ordered her execution.(MNS Photo)

MANILA (Mabuhay) – The Department of Foreign Affairs (DFA) on Thursday clarified reports on the supposed moratorium on the execution of Mary Jane Veloso, the Filipina convicted in Indonesia for drug smuggling.

DFA spokesperson Charles Jose, citing Philippine officials in Jakarta, said the Indonesian government just reiterated its earlier statement that executions are not among its current priorities.

“Our embassy in Jakarta clarified that what the Indonesian government said was that executions are not a priority for now,” Jose said.

Jose said the Indonesian government’s statement on executions “was a general statement, without specific reference to Mary Jane’s case.”

“But of course that’s good news,” he added.

Veloso, who has always maintained her innocence and said human-traffickers duped her, was also due to be executed in April but was granted a last-minute temporary reprieve.

The reprieve was given following appeals from the Philippine government, which said Veloso’s testinomy is needed in the case of her alleged recruiters in Nueva Ecija in the Philippines.

Jakarta had insisted that her sentence has only been postponed while legal proceedings run their course in the Philippines.

Veloso was arrested in April 2010 at the Yogyakarta Airport. She was then convicted for possessing 2.6 kilograms of heroin in her luggage. (MNS) 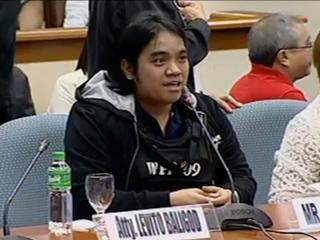