Diego Loyzaga says acting is in his blood 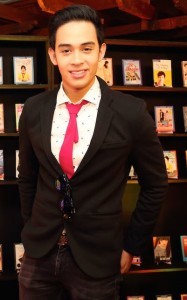 MANILA (Mabuhay) — Being the son of actors Cesar Montano and Teresa Loyzaga, Diego Loyzaga admits that even as a child, he was already curious about the industry where his parents belong.

“Of course, the curiosity, the temptation has always been there. Being their son, I felt like a celebrity myself,” he said.

Still, it took Diego some time before he yielded to the acting bug, which he first felt when he became a member of his high school’s drama club.

“No one really encouraged me to pursue acting seriously. When I talked to both my mom and my dad about it, they were one in saying that while they prefer that I finish my studies, they would support whatever I want and whatever makes me happy,” he confessed.

Diego did his part in finishing high school and passing the college entrance exam at De La Salle University where he hopes to take up a course in either multimedia arts or music production at the College of St. Benilde.

“So even in school, I’m really leaning towards the artist path as far as planning my career is concerned.”

By 2011, Diego was in the cast of ABS-CBN’s “Mara Clara” when he could barely speak Tagalog. Other noteworthy projects for the network include “Growing Up”, “Wansapanataym”, “Maalaala Mo Kaya” and “Mirabella”.

He also recently starred in “Mr. Popular meets Ms. Nobody”, his first TV series with TV5.

“It was actually very surprising to me that the whole cast and crew clicked very fast. It was such a good experience that I wanted to do it again. I wanted to work with the same people, with Shaira and Mark, with our director, Direk Jay Altarejos and of course, TV5. It was really fun working here,” he enthused.

Given the chance, Diego said he doesn’t mind being a part of a loveteam and admits that he actually misses it.

“Seriously, I missed being paired with somebody. When you are teamed up with somebody, that person, that girl becomes someone you trust, someone you become close and someone that makes you happier so yes, sana nga maging part ako ng love team soon.”

Asked if there’s someone he prefers to be paired with from TV5 in particular, Diego did not hesitate in pointing to Nicole Estrada.

“I would prefer to team up with someone I already know and am comfortable with so the first on my list would be Nicole. Sobrang nakakatuwa po siya. Sana lahat ng stars kagaya niya,” he said while a smiling Nicole just listened in the background.

Although Nicole specifically told InterAksyon that she prefers to be known on her own and not as part of a love team, she seemed very open to the idea of being paired with Diego.

“Pagbibigyan ko siya,” she joked as the chemistry between the two looked very evident even by just observing how they responded to each other.

Love team or no love team, Diego is very much determined to make his mark in the industry with performances that should make his parents proud. Even as he awaits for his next project, he is already scheduled to do a movie with his father.

“I guess you could say, acting is already in my blood, in my genes. I just have to make the most out of the opportunities that come my way,” he declared.(MNS)