Dingdong all set for altar date with Marian 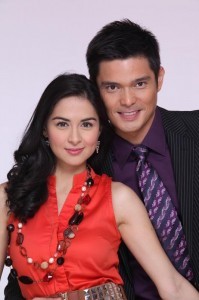 MANILA (Mabuhay) — The suit, the shoes, even the stag parties have been taken care of.

Groom-to-be Dingdong Dantes is all set to exchange “I do’s” with fiancée Marian Rivera at the Immaculate Conception Cathedral in Cubao on December 30.

During the night of fun and games, a sort of stag party with the press thrown for him by GMA, the network’s acknowledged primetime king revealed he does not feel any pre-wedding jitters at all.

The past couple of weeks, the engaged couple have been juggling their showbiz duties and preparing for their upcoming nuptials. Dingdong is finishing “Kubot: The Aswang Chronicles 2,” while Marian is shooting “My Big Bossing,” both entries in the coming Metro Manila Film Festival that opens five days before their wedding date. They have not neglected tradition though, and have personally gone to each of their intended wedding sponsors.

“Like what I said, everything about this wedding is very personal. Pati pag imbita at pati pag-oo [ng mga ninong at ninang], gusto naming personal namin ma witness.”

The wedding entourage is almost complete. Best man is Dingdong’s younger brother Angelo, and among the bridesmaids are host Luane Dy and actress Ai Ai de las Alas, while maids of honor are Roxee Barcelo and Ina Feleo.

The traje de boda will be a Michael Cinco creation, while the groom’s suit will be by his good friend, Randy Ortiz.

The shoes were already selected even before the engagement. Marian’s will be by famed designer Christian Louboutin, bought two years ago in Macau. For Dingdong, he’ll wear a pair given to him by a ninong a year ago.

There have been several bridal showers, beginning with the Disneyland trip where Marian had not only her friends with her, but also mother and lola. Dingdong’s had two so far – one with his friends and cousin in Germany and another with the local showbiz press.

They have picked their menu and caterer plus the venue for reception.
What seems to be the only thing the couple has yet to finalize is their honeymoon!

Gil Cuerva hopes to work with Bea Alonzo in a project