Dingdong speaks up about ‘royal wedding’ 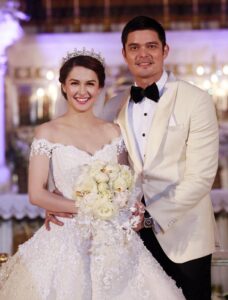 Two weeks after he married Marian Rivera in what many dubbed as a “royal wedding,” Dingdong Dantes finally broke his silence and addressed his critics.

While many were entertained by the celebrity wedding, the couple also received criticism for what some felt was a display of extravagance amid the widespread poverty in the country.

Some even accused the couple of not spending their own money for the special occasion, claiming that the event was supposedly sponsored by different people.

Dantes stressed that he paid for their wedding.

“Ako kasi ang thinking ko kasi diyan itong araw na ito is really for her and it’s for the sake of our families. But it’s really more for her. I really want it as a gift para sa kanya. So dapat lang naman talaga [na ako ang gumastos],” he explained.

While “help” from their friends were graciously accepted, Dantes explained that the wedding was not fully sponsored.

“Sabihin na lang natin na meron kaming mga naging kaibigan even before this and they are helping us in so many ways. Hindi naman pupwedeng sabihin na dole out 100% dahil negosiyo rin nila ‘yan eh and at the same time kaibigan rin namin sila.”

Asked how long he has saved up for the much-publicized wedding, Dantes said: “Kasi when you say you’re saving up parang you’re putting a limitation on it eh. Sabihin natin kung nangyari ito 12 years ago, kung ano man ang meron ako I would give it everything as long as alam ko ma-exhaust ko lahat to make her happy.”

Pia Wurtzbach assures it’s okay to be down sometimes