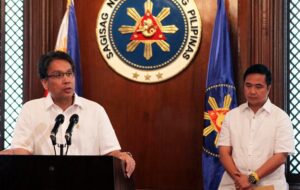 Secretary Manuel Roxas II accepts his appointment to the Department of Interior and Local Government replacing Sec. Jesse Robredo, as announced by President Benigno S. Aquino III during a press briefing at the Presidentâ€™s Hall in Malacanang Palace on Friday (August 31). On the other hand, Cavite 1st District Representative Joseph Emilio Abaya takes over the post of DOTC chief. (MNS photo)

“It pays to be prepared.”

Roxas will preside at a command conference along with various government agencies on Monday/June 10 at Camp Crame to kick off the week-long activities aimed at attaining “zero casualty” during disasters particularly with the onset of the rainy season.

The disaster preparedness program is focused on thousands of informal settler families (ISFs) living dangerously on or along major waterways and are usually the first casualties during disasters. The government has targeted at least 20,000 ISFs to be moved to on-site, in-city or near-site relocation areas this year.

On tap during the week are site inspections of identified barangays in six major waterways and flood drills in 16 pilot areas or barangays in the National Capital Region.

The DILG has organized orientation-consultation meetings with officials of 11 cities that are along major waterways for the purpose of reviewing their updated local disaster risk reduction management plans, contingency plans, evacuation plans, early warning systems (EWS) as well as hazard maps if available in some LGUs.

Brion said the DILG is looking forward to the creation of hazard maps by the NDRMMC Risk Analysis Project and the Light Detection and Ranging (LIDAR) maps.

Those invited to attend Monday’s command conference with the DILG are officials of the Philippine National Police, Bureau of Fire Protection, local government units, and national government agencies such as the Department of Science and Technology, PAGASA, PHILVOLCS, Department of Health, and Project NOAH.

No COVID-19 cases yet among Filipinos living in Brazil — ambassador