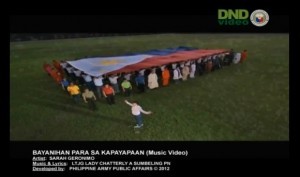 Music Video on the on-going peace and development in the countryside program of the Armed Forces of the Philippines, produced and developed by the Philippine Army Public Affairs Office. Popular young singer-actress Sarah Geronimo lends her persona and services pro bono as part of her “bayanihan” in the nation’s aspiration for peace and stability. Music and lyrics by LtJg Lady Chatterly Alvaro Sumbeling PN. Launched and released on November 28, 2012 at the Headquarters Philippine Army.