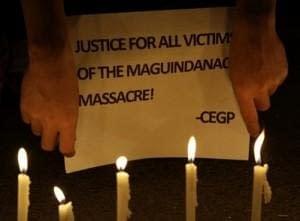 Justice Secretary Leila De Lima said Akmad is a “key witness” in the second wave of complaints now pending with the DOJ in connection with the November 23, 2009 Maguindanao massacre case, and has to be secured due to threats to his life.

Akmad was recently arrested in Makati City by virtue of an arrest warrant for murder and arson issued by the Cotabato City Regional Trial Court. The WPP took him into custody and refused to hand him over to the arresting officers.

De Lima said proper representations were made with the arresting officers, as well as the trial court, informing them of his WPP status.

De Lima stressed that Akmad’s testimony is vital to the case, especially that he is a relative of several of the primary accused, namely former Maguindanao Governor Andal Ampatuan Sr., former Datu Unsay Mayor Andal Jr., and former Autonomous Region in Muslim Mindanao (ARMM) Governor Zaldy Ampatuan. The justice chief said Akmad has identified other several “powerful personalities” as co-conspirators in the commission of the crime.

De Lima said Akmad’s life is in danger because of his testimony, and pointed out that he had already been ambushed before. Another key witness in the massacre case also survived an ambush attempt, she added.

The DOJ is awaiting the Cotabato court’s action on the former’s motion to retain custody of Akmad, and remains hopeful that the court will grant the plea. De Lima pointed out that under the WPP Law, there is no coverage prohibition on individuals facing other charges in court.

The justice chief made the pronouncement amid a plea made by the family of slain jail warden Al-Khail Mamalangkay for the DOJ to release Akmad from the WPP. Mamalangkay was allegedly shot to death by Akmad in 1998.(MNS)

Scare Up Some Fun with a Graveyard Bash