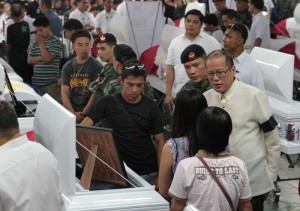 MANILA, Oct. 28 (Mabuhay)– The Department of Justice has summoned to a preliminary investigation the 90 suspects in the killings of 35 of the 44 elite policemen in the January 25 Mamasapano encounter.

Prosecutor General Claro Arellano said the preliminary probe hearings would be done on November 11 and 27, at 10 a.m. at the DOJ main office in Manila.

He said subpoenas for the implicated members of the Moro Islamic Liberation Front had already been sent to the rebel group.

Meanwhile, subpoenas for members of the Bangsamoro Islamic Freedom Fighters and private armed groups had already been sent to the office of the Mamasapano mayor.

The NBI-NPS last September filed the first batch of criminal complaints against the 90 individuals behind the deaths of the 35 Special Action Force commandos of the Philippine National Police who belonged to the 55th Special Action Company.

The slain policemen were part of a team trying to serve arrest warrants and capture two international terrorists said to be hiding in Mindanao, including Malaysian terrorist Zulkifli Bin Hir alias Marwan.

Marwan was killed in the operation but the other terrorist Basit Usman was able to escape. Usman was subsequently killed in an encounter with Moro Islamic Liberation Front fighters in May.

A supposed second batch of criminal complaints could not be filed yet as the identities of the suspects in the killing of the remaining nine SAF commandos from the 84th Seaborne command have yet to be determined. Then Justice Secretary Leila de Lima had said not even survivors of the clash could identify their attackers.(MNS)