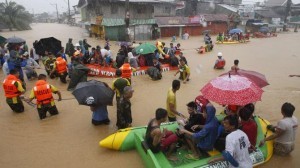 Flood victims are evacuated in rescue boats after their homes were swamped by heavy flooding in Marikina, Metro Manila September 19, 2014. Heavy rain in the Philippine capital, Manila, caused flooding in many areas on Friday, shutting schools, government offices and financial markets as a tropical storm made landfall to the north. Thousands of residents in low-lying areas were moved to higher ground, officials said, as flood waters rose quickly after the equivalent of half a month’s usual rain fell in six hours. (MNS photo)

MANILA (Mabuhay) – The Department of Justice (DOJ) threw its support on the proposal in the House of Representatives to create a special metropolitan political subdivision in the National Capital Region.

House Bill No. 712, authored by Caloocan Rep. Edgar Erice, proposes the creation of the Metropolitan Manila Regional Administration (MMRA), a new political unit of government that has a supramunicipal council authority to enact ordinances and regulations for the welfare of NCR residents.

De Lima stressed that under Section 11, Article X (Local Government) of the 1987 Constitution, Congress is allowed to create special metropolitan political subdivisions, subject to a plebiscite as set forth in Section 10 of the same Article.

De Lima clarified that component cities and municipalities under the MMRA will still retain their basic autonomy and will still be entitled to their own local executive and legislative councils.

The MMRA jurisdiction will be limited to basic services requiring area-wide coordination and supervision, including drainage and flood control, zoning and land use, transport and traffic management, garbage collection and dump sites, health, and peace and order.

De Lima, however, stressed that the creation of the MMRA would require the approval by a majority of the votes cast in a plebiscite in the political units directly affected.

She noted that this requirement was addressed in Erice’s proposal.

De Lima also said that the DOJ “defers to the comments of the other relevant government agencies insofar as the other provisions which are relevant to their respective mandates are concerned.”