Donaire on a title fight with Montiel Feb. 19 in Las Vegas 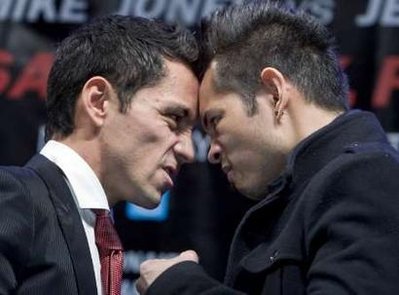 Former world flyweight champion Donaire, on a 24-fight win streak over nine-and-a-half years, has said, “I want to make a statement of who Nonito Donaire really is. This is finally the chance I have been looking for” before knocking out Ukranian Wladimiro Sidorenko last December 4 to earn the right to face World Boxing Council champion Montiel. Donaire stopped Sidorenko in the fourth round to set up the world title showdown with the Mexico champion who sports a 43-2-2 with 33 knockouts win-loss card.

Sidorenko was knocked to the canvas twice in the first three rounds and took a hard right to the nose in the fourth that prompted him to take a knee on the canvas. Referee Marcos Rosales halted the bout after 1:48 of the fourth round.

“I wanted to make a statement in that fight and I did,” Donaire said.

“When I have Montiel in my sight, as my target, I feel totally motivated. I have no fear,” Donaire has said. “They are going to see a different guy going in there. I’m motivated with Montiel on the horizon. This is where I want to be.”

Montiel’s last fight was also a statement on his part after decking Jovanny Soto in the second of the 10-round scheduled fight in Mexico. In his last six fights, no opponent has reached past the fourth round.

Giants One Win Away From World Series Title