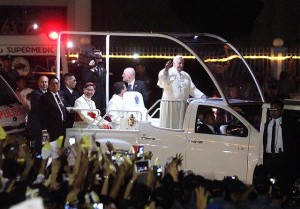 Pope Francis waves to the crowd while on board an Isuzu D-Max Popemoblie for his trip to the Apostolic Nunciature in Manila on Thursday, January 15, from the Villamor Air Base in Pasay City. Pope Francis is the Philippines for a five-day state and apostolic visit that will be highlighted by a meeting with survivors of super typhoon Yolanda in Leyte on Saturday, January 17. (MNS photo)

Manila, Philippines | AFP |  – Pope Francis on Thursday condemned killing in God’s name but warned religion could not be insulted, weighing into a global debate on free speech ahead of a rapturous welcome in the Philippines.

The pontiff made the comments to reporters as he flew from Sri Lanka to begin a five-day visit in the Catholic Church’s Asian stronghold that is tipped to attract a world-record papal crowd.

“To kill in the name of God is an absurdity,” Francis said when asked about last week’s assault by Islamist gunmen on French satirical magazine Charlie Hebdo in which 12 people died.

But the 78-year-old pontiff also said “each religion has its dignity” and “there are limits”.

“If a good friend speaks badly of my mother, he can expect to get punched, and that’s normal. You cannot provoke, you cannot insult other people’s faith, you cannot mock it,” he said.

Brothers Said and Cherif Kouachi stormed Charlie Hebdo’s Paris office on January 7, killing some of France’s most loved satirical cartoonists in their outrage over the magazine’s repeated depictions of the Prophet Mohammed.

The assault was followed two days later by an attack on a kosher supermarket in Paris by a gunman claiming to have coordinated his actions with the brothers.

In all, 17 people died over three days in the bloodiest attacks in France in half a century, sparking a global debate on the limits of free speech.

Charlie Hebdo drew ire from religious groups again this week when it published a “survivors” issue featuring an image of the prophet weeping on the cover.

The cartoon depicts Mohammed holding a sign reading “Je suis Charlie” (I am Charlie), which became a global rallying cry for those expressing sympathy for the victims and support for freedom of expression.

The cover sparked a backlash in some parts of the Muslim world, where depicting the prophet is seen as blasphemous.

Pope Francis, seen by many around the world as more progressive than many of his predecessors, said freedom of speech should be tempered by respect for faith.

“Freedom of speech is a right and a duty that must be displayed without offending,” he said just before arriving in the Philippine capital of Manila.

Francis on Thursday began the second leg of his Asia tour after a successful visit to Sri Lanka, where he preached on reconciliation and religious tolerance.

Church bells tolled across the Philippines as his plane touched down, as hundreds of children on the tarmac chanted: “Welcome Pope Francis”.

Hundreds of thousands of people then crowded the closed-off route the pope passed as he made a 35-minute trip in a “popemobile” from the airport to the Vatican’s embassy to rest overnight.

The pope stood on the back of the vehicle, which had no walls, waving and smiling constantly to the crowd.

“When I saw him wave, it was like a thrill went through me,” 35-year-old housewife Ivy Japlos told AFP.

Francis has said his two-nation tour is aimed at adding momentum to the Church’s already impressive growth in Asia, with its support in the Philippines the benchmark for the rest of the region.

Eighty percent of the former Spanish colony’s 100 million people practice a famously fervent brand of Catholicism, and the pope is set to enjoy thunderously enthusiastic crowds throughout his stay.

The high-point of his trip is expected to be an open-air mass on Sunday at a park in Manila, with organizers preparing for up to six million people despite a forecast of rain and security concerns.

Organizers have said that, if the crowd is as big as expected, it will surpass the previous record for a papal gathering of five million during a mass by John Paul II at the same venue in 1995.

Authorities have expressed major concerns over the pope’s security in the Philippines, where attempts have been made to kill visiting pontiffs twice before.

Nearly 40,000 soldiers and police are being deployed to protect Francis in what Philippine military chief General Gregorio Catapang described as a “security nightmare”.

Potential stampedes from the giant crowds, as well as the threat of Islamic militants or lone-wolf assailants, are among the concerns.

Philippine President Benigno Aquino made a nationally televised address this week specifically to highlight the security threats for the pope and call on all Filipinos to help protect him.

Adding to the concerns, the pontiff has insisted he will not travel in a bullet-proof vehicle during his big events so he can be closer to the faithful.

Paper or Plastic — How About Neither?