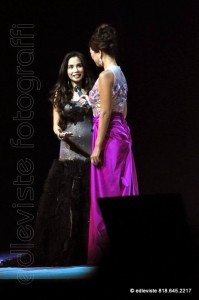 Interviewed by pageant host and KTLA anchor Cher Calvin, Dr. Tess engaged Cher and the audience with an eloquent and inspiring talk on beauty from her personal perspective and as a renowned expert on skin and body care.

She also touched on her pioneering work with stem cells through the Lifeline skin cream and Lifeline skin care treatment, both of which she recently introduced to the market.

The day before on Saturday, Dr. Tess was at San Diego TV Channel CW 6’s for its “Wake Up San Diego” morning TV program. She appeared with her patient Marie Vivian Brockway, who gave her testimony as to how much Dr. Tess’ treatment is benefiting her as a long-distance runner in her 40s.

Also on Sunday (and replayed Tuesday), Dr. Tess played host to American Idol finalist Jessica Sanchez on her The Dr Tess Show to right now on GMA Pinoy TV. Among the highlights of this recent episode is a clip of Jessica and Dr. Tess and her daughter Jana enjoying a night of karaoke at Barrio Fiesta in Glendale.

It’s been a busy month so far for the pioneering dermatologist and world renowned public speaker and TV personality.

On August 12, she appeared in her regular Beauty Take Away segment at “The Talk” on CBS (1pm PST), where she discussed solutions to common skin problems with the show’s hosts, along with superstar, Marie Osmond.

On August 11, she talked about her special combination treatment for underarm darkening and sweating –including Botox and IV Glutathione – in an episode of “Adobo Nation.”

On August 4, Dr. Tess was honored with the Bayanihan Spirit Award for distinguished physicians in California during the 11th Annual Historic Filipinotown Festival and 5K Run at the Silver Lake Medical Center Grounds.

She is a much sought-after public speaker and physician expert on mainstream television, with appearances on The Rachel Ray Show, The Talk on CBS, The Doctors, America’s Next Top Model, San Diego Living, The Wellness Hour, and Fox News. Filipino audiences know her from her appearances on Adobo Nation at The Filipino Channel and her own Dr Tess Show on GMA Pinoy TV which continues to air Sunday and Tuesday evenings.

For more information about Dr. Tess and her clinics, call (888) 744-7004 or visit  www.mbeautyclinic.com, www.tessmd.com, or www.rsvptalkshow.com.