Drilon: Senate to give special attention to BBL when session resumes 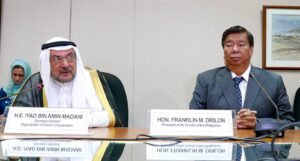 PRESSCON WITH DRILON, OIC SECRETARY GENERAL: Senate President Franklin M. Drilon (right) and H.E. Iyad Bin Amin Madani, Secretary General of the Organization Islamic Cooperation (left), answer questions from the media during a press conference after a courtesy call at the Senate on Monday/April 20, 2015. Madani said that the OIC supports the passage of the Bangsamoro Basic Law, and vowed to help in bringing all groups in Mindanao towards the peace process, “to ensure an inclusive process, which involves and benefits all.” (MNS photo)

MANILA (Mabuhay) – Once Congress resumes sessions on Monday, the Senate will give “special legislative attention” to the proposed Bangsamoro Basic Law to make sure that it will be constitutional, fair, and inclusive, Senate President Franklin Drilon said Friday.

“It will receive a special legislative attention in the coming weeks,” Drilon said in a statement. “We will devote extra time and effort to ensure the passage of a BBL that is constitutional, fair and inclusive – one that will help end the decades of strife in Mindanao.”

He said once the committee on local government, chaired by Senator Ferdinand Marcos Jr., submits its report on the BBL, they will immediately calendar it for discussion.

“We expect strong debates on the floor over the passage of this bill. We all acknowledge the necessity of this piece of legislation to ensure genuine peace and growth for our brothers and sisters in Mindanao,” he said.

Marcos earlier said that he expects to conduct two to three more hearings on the BBL before reporting it out to the plenary. He said the amendments to the draft bill will be introduced during the plenary deliberations.

Malacañnang is pushing for the passage and implementation of the BBL before the term of President Benigno Aquino III ends in 2016.

Drilon said the Senate will also work for the passage of legislations that would boost the country’s competitiveness amidst the emerging opportunities and challenges brought about by the ASEAN economic integration.

To be taken up are the proposed Tax Incentives Management and Transparency Act (TIMTA) and the creation of a Department of Information and Communications Technology (DICT).

He said the Senate will also work for the passage of the proposed Customs and Tariff Modernization Act (CTMA), which aims to reduce smuggling and make customs procedure and operations more simple and transparent.

“We intend to advance the discussions on the CTMA to address the most pressing problems of the Bureau of Customs,” he said.

He said the Senate is also expected to pass on third and final reading on Monday Senate Bill No. 2280, which seeks to amend the Probation Law of 1976; SBN 2518, which aims to remove the conditions for the condonation of all unpaid taxes due from local water districts; and House Bill No. 945, which seeks to declare the last full week of August as Armed Forces of the Filipino People Week.

“We will work hard and do all we can to make the remaining time in our 2nd regular session productive and meaningful by finishing the priority measures pending on the floor and advancing other key reform measures that are still at the committee level,” Drilon said. (MNS)

Hocus pocus in the Senate