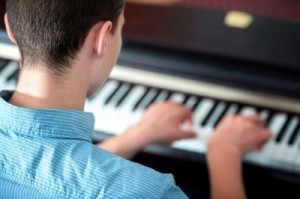 (Relaxnews) – A child’s ability to distinguish musical rhythm could enrichen his understanding of grammar, according to what is believed to be a first-of-its-kind study at the Vanderbilt Kennedy Center in Nashville, Tennessee.

Working with 25 six-year-old children who were developing normally, research fellow Reyna Gordon, Ph.D., from the Department of Otolaryngology started by testing them for standard music aptitude.

The computer-based test asked them to judge whether two slightly differing or identical rhythms were just that.

Next, the children played a computer game developed by Dr. Gordon and her colleagues involving a beat-based assessment that tested their understanding of melodies.

The research team then assessed the children’s grammar skills by asking them to discuss several photographs and taking note of how they spoke.

This would give them an advantage in learning a language, she says. Dr. Gordon hopes her work will help educators to recognize music’s unique role in brain development and inspire more music education worldwide.

The study was published in the journal Developmental Science.