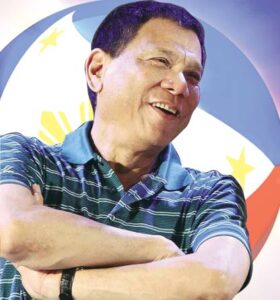 DAVAO CITY (Mabuhay) – Davao City Mayor Rodrigo Duterte has appealed to his supporters to give him more time before he makes a decision on whether or not to plunge into the presidential race.

Duterte, who showed up and spoke at the grand rally in Davao City organized by the Mayor Rodrigo Duterte for President Movement, which the Partido Demokratiko Pilipino-Lakas ng Bayan (PDP-Laban) has supported, on Friday evening said he would not be making decisions yet.

“Give me some time (to decide). I’ll talk to (my family) again,” Duterte said as the crowd roared in approval.

The Davao City mayor has repeatedly said in the past that he was not interested in running for the presidency because he has no money to sustain a national campaign. He said while some big election spenders had assured him of funding, he had to turn them down because he did not want to incur debts of gratitude.

Duterte said he was already old at 70 and that his family was opposed to the idea.

“My daughter (former mayor Sara) ‘Inday’ is already angry at me. She is the most vocal. She told me I’m old already. Her mother also said no. But I think I need to talk to them,” he said at the rally.

Duterte said if Sara continues to oppose his presidential run, “I will bring her here and we will make her run instead.”

“If my children will see this (crowd), they might change their mind already. They must be here somewhere,” he said.

As the crowd roared and chanted “run Duterte run,” the mayor said: “It’s nearing, just be patient. Just give me some more time to talk to my family. I hope you will respect that.”

He then asked the people in jest, “Pray tell, who will lead Davao if I’m no longer here (as mayor)? Whom the criminals will fear?”

If elected president, Duterte said he will institute massive reforms in government because he did not want to become a “jester or a puppet.”

“If they try to impeach me, I will declare a revolution,” he added, citing former President Joseph Estrada’s case, which sent the crowd roaring and chanting his name.

“My responsibility is to see to it that everyone is comfortable and safe. Compassion is not a weakness and violence is not a strength,” Duterte said as he denied anew that he ordered the killing of suspected criminals in the city.

He said he vowed to make Davao City a peaceful place and along the way, there were deaths, but he clarified that these were not extrajudicially carried out.

He said he never ordered the police to just shoot and kill suspects because he fears “karma (a good or bad force that happens to a person based on his previous actions).”

“(Justice Secretary Leila) de Lima said I killed 1,000 persons. I have been mayor for 22 years and I only killed 1,000? That’s cheap,” Duterte said, adding that the peace and order problem could not be solved by killing suspects.

“That’s not the way democracy operates,” he added.

Mar Masanguid, prime mover of the Duterte for President Movement, said they did not expect Duterte to show up at the rally although they have earlier invited him over.

He said Duterte’s presence there indicated that the mayor was softening on his earlier stand of not running for the presidency.

“We’ll have to wait. I think it will only be a matter of time before he announces his candidacy,” Masanguid said.

During the rally, a video of communist leader Jose Ma. Sison endorsing Duterte was played.

In reaction to Sison’s endorsement, Duterte said, “This is the time the generals will shoot us. But it has always been like that.”

Duterte’s image of having transformed Davao from “killing fields” in the 1980s to the fast-growing urban center that it is now has made some people believe he would be as effective if he becomes president.

Duterte’s main programs in governance included peace and order, agriculture and economy, and ending the Moro rebellion and the communist insurgency.

Duterte’s image of having transformed Davao from “killing fields” in the 1980s to the fast-growing urban center that it is now involved main programs in governance such as peace and order, agriculture and economy, and ending the Moro rebellion and the communist insurgency.

He was also batting for the privatization of some government agencies such as the Bureau of Customs, the Bureau of Internal Revenue and the Government Service Insurance System, among others.

Former Iligan City Mayor Franklin Quijano said, “I am appealing to the people of Davao to share the abundance and progress of their city” by supporting Duterte for president.

“The Davao brand of leadership must be brought to the national level so that the entire country will benefit from it,” Quijano said.

Earlier, Cebu 3rd district Representative Gwendolyn Garcia said Duterte has a large following among Cebuanos and that the estimated 2.4 million registered voters in the province could easily sway to his favor.

Garcia said Cebuanos were known to support politicians, who trace their roots in Cebu.

Duterte’s late father, Vicente, who was governor of the then undivided Davao once served as mayor of Danao City in Cebu.

Duterte is also related to the politically-active Durano, Almendras and Patalinghug clans in Cebu. (MNS)

CBCP calls for probe on misuse of DAP funds