Eating Asian pears before drinking could head off hangovers: study 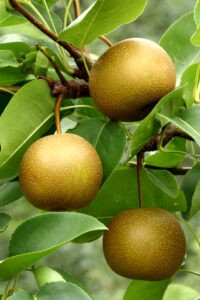 The pears used in the study are known by different names: Asian, Korean, and nashi. ©Stephen B. Goodwin/shutterstock.com

(Relaxnews) – Anticipate a booze-fueled, night of free-flowing drinking? You might want to hit the grocery store and pack in a few pears to head off a hangover.

Because preliminary findings out of Australia’s national science agency show that eating a pear – but not just any pear – could keep hangovers at bay the next day.

Want to test the theory? According to scientists at the Commonwealth Scientific and Industrial Research Organization (CSIRO), the best varietal is the Korean or Asian pear, which differs from their hourglass cousins by resembling apples in shape.

The fruit is also known as the nashi pear.

Known for their high water content and crisp, grainy texture, Asian pears are generally eaten raw or used as an ingredient to tenderize meats in Asian cooking.

But Australian researchers have uncovered another unexpected use for the fruit, as they found that certain properties act on key enzymes involved in alcohol metabolism.

The pears were also shown to reduce levels of blood acetaldehyde, the toxin believed to be responsible for wicked morning-after hangovers.

Researchers emphasize, however, that the positive effects were only observed when the pear was consumed prior to drinking.

For the research, subjects drank 220ml of Korean pear juice but scientists said the consumption of whole pears could have similar effects.

In addition to increasing concentration, the fruit was also shown to reduce common hangover symptoms such as memory loss and sensitivity to light.