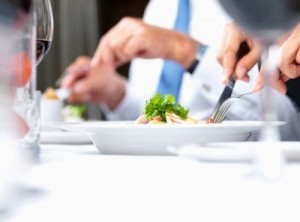 Slow down: a new US study finds that eating slower may help you cut calories and feel fuller longer.
©Yuri Arcurs/shutterstock.com

(Relaxnews) – One way to eat less is to simply slow down, a new US study suggests. Eating your meals more slowly may help you consume fewer calories while also feeling fuller longer afterwards.

Published online January 2 in the Journal of the Academy of Nutrition and Dietetics, the research looked at two groups of 30 people — one group of people were at a normal weight while the second group were overweight or obese.

While the study was small, WebMD reports that “there are some useful messages here for anyone struggling to keep to a healthy weight.” They add: “It can be hard to find time to eat properly during a busy day, but snatching a sandwich and eating it quickly at your desk may not be the best way to keep your weight under control.”