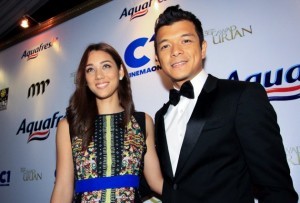 “I’m so happy! It’s nice to be back. Everything just feels right and fine,” says Jericho Rosales, who, has returned to Star Magic, which originally handled his career.

The top calibre actor and singer comes full circle with his return to Star Magic after being managed by Manila Genesis.

Echo dispelled the rumor that there is bad blood between him and Genesis, which is headed by Angeli Pangilinan, the wife of Gary Valenciano.

“Genesis remains to be a family and same with Star Magic, where I started,” he said.

“It just felt good to see familiar faces and I’m excited to be working again with Star Magic,” he added.

This year, Jericho once again showcased his versatility as an actor when he effectively portrayed the character of Adrian in the highly talked-about primetime soap opera, “The Legal Wife.” Echo, together with his co-stars Angel Locsin and Maja Salvador, earned positive reviews for their superb performances and even became daily trending topics in social media.

In the coming months, the newly-married actor will go in full swing. He has started taping for a new series that will start airing this November. Titled “Bridges,” the upcoming soap will see Jericho paired once again with Maja.

As for movies and concert, Jericho has an entry in Cinema One Originals, entitled “Project Red,” which will also unreel in November. This action-drama movie will also star Mercedes Cabral and Nico Antonio and will be directed by Emilio Jay Abello.” He is also is set to hold a concert in Malaysia.

On a personal note, Jericho just came from a honeymoon with his wife, host Kim Jones.

The actor and his wife tied the knot in an intimate wedding in Boracay last May. The couple also graced the Star Magic Ball last September 6. (MNS)