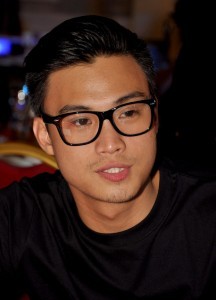 MANILA, Apr 19 (Mabuhay) — EDGAR Allan Guzman said that he finds it flattering that he is being considered as an heir to the throne of Prince of Independent Films, Coco Martin.

Edgar, who also started in the independent film industry, had worked with Coco in the past and remains as a good friend of the actor.

He said he admires Coco for his successful and his brand of acting.

Edgar believes the viewing public started to notice him when he starred in Cinemalaya entry “Ligo na U, Lapit na Me” in 2011. It brought him several trophies like the Golden Screen Awards Best Performance by an Actor in a Leading Role and the Balanghai Best Actor trophy.

His portrayal of “Intoy” in the said film earned him praises from his colleagues in the business. Edgar said it is one of the highlights of his career.

Edgar assured that he will keep his feet firmly planted on the ground.

Edgar is one the actors who can work with rival networks. He has a contract with TV5 channel but he can also do projects with ABS-CBN.

He added that his mother station allow him to constantly learn and spread his wings as an actor.

Edgar said he is set to release a music album this year and to do another Cinemalaya movie. (MNS)