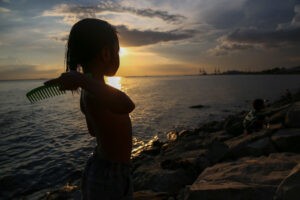 A young girl combs her hair after a dip in Manila Bay on Friday. Manila residents tried to find comfort in various ways as temperature soared to 35.9 degrees Celsius, making it the hottest day on record in the metropolis so far this year, according to weather bureau PAGASA. (MNS photo)

PAGASA also predicted that the country will experience lower than normal rainfall conditions from September 2015 to February 2016, with some areas experiencing 40 percent of normal levels. By February 2016, 65 of the Philippines’ 81 provinces are expected to experience drought.

Air temperature is expected to be warmer than average, though cold surges are expected from November to December. PAGASA expects 5-8 tropical cyclones to enter the Philippine Area of Responsibility (PAR) between September 2015 and February 2016.