(CNN) – Elizabeth Taylor, the legendary actress famed for her beauty, her jet-set lifestyle, her charitable endeavors and her many marriages, has died, her publicist told CNN Wednesday. She was 79.

Taylor died “peacefully today in Cedars-Sinai Hospital in Los Angeles,” said a statement from her publicist. She was hospitalized six weeks ago with congestive heart failure, “a condition with which she had struggled for many years. Though she had recently suffered a number of complications, her condition had stabilized and it was hoped that she would be able to return home. Sadly, this was not to be.”

Though a two-time Oscar winner – for “Butterfield 8” (1960) and “Who’s Afraid of Virginia Woolf” (1966) – Taylor was more celebrated for simply being Elizabeth Taylor: sexy, glamorous, tempestuous, fragile, always trailing courtiers, media and fans. She wasn’t above playing to that image – she had a fragrance called “White Diamonds” – or mocking it.

“I am a very committed wife,” she once said. “And I should be committed too — for being married so many times.”

She was hailed, in her prime, as the world’s most beautiful and desirable woman. Her affair with actor Richard Burton, which began on the set of the film “Cleopatra,” fueled a paparazzi rush unrivaled in its time. The two later married — twice — providing gossip columns and movie magazines with a wealth of material.

But Taylor could also be an effective and arresting actress. Her harrowing performance in “Who’s Afraid of Virginia Woolf” (1966), opposite Burton, showed her as shrewish, plain, embittered – the complete opposite of her real-life image.

Taylor was a champion for a number of charitable causes, notably the fight against AIDS. She founded the Elizabeth Taylor AIDS Foundation after the death of her friend Rock Hudson, and plowed both her time and money into its work, especially as her acting career waned in the 1980s. The BBC once noted that her charity work had grossed as much as her film career. 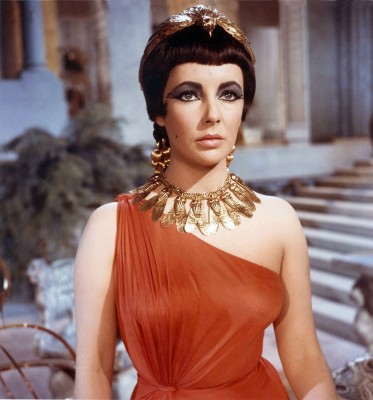 Elizabeth Rosemond Taylor was born February 27, 1932, in London, the daughter of two wealthy American art dealers, Francis and Sara Taylor. Her mother was a former actress who had given up the career when she married, but encouraged her daughter in the pursuit. Indeed, Elizabeth Taylor and her mother were to remain extremely close until the latter’s death in 1994, at age 99.

Just after World War II began, her parents moved back to the United States and settled in Los Angeles, where Francis Taylor catered to a high-level clientele. Young Elizabeth was noted early on for her looks: According to one perhaps apocryphal story, she was spotted by a talent scout who suggested her for Bonnie Blue Butler in “Gone With the Wind,” but the idea was reportedly shot down by her father.

Nevertheless, she eventually made her debut for Universal, which placed her in 1942’s “There’s One Born Every Minute.” Taylor was then signed by MGM, which was to be her home for almost two decades, and made “Lassie Come Home,” opposite Roddy McDowall. The actor became a devoted friend.

But it was Taylor’s next film, 1944’s “National Velvet,” that made her a star. The story of a girl in love with her horse earned her public adulation – and her equine co-star, The Pie. (Her other co-star, Mickey Rooney, was taken.) For the rest of the 1940s, she was an MGM regular, some of her films winners – the 1949 version of “Little Women” – and others, quickly forgotten, such as “Julia Misbehaves.”

In 1950, Taylor turned 18 and had her first hit as an adult, the classic “Father of the Bride,” in which she played Spencer Tracy’s soon-to-be-married daughter. Real life mirrored art when Taylor decided to marry hotel heir Conrad “Nicky” Hilton Jr., but the marriage wasn’t nearly as successful as the film: it lasted just eight months.

Critical acclaim arrived with Taylor’s next film, “A Place in the Sun,” based on the Theodore Dreiser novel “An American Tragedy.” Taylor played the beautiful woman pursued by Montgomery Clift, who kills his pregnant girlfriend (Shelley Winters) while boating. The film received nine Academy Award nominations, but Taylor was shut out.

It wasn’t until 1958 that Taylor received her first Oscar nomination, for 1957’s “Raintree County.” By then, she was an even bigger star than before, and known as much for her off-screen romances as her on-screen talent.

She married actor Michael Wilding – 20 years her senior – in 1952, a marriage that lasted five years and produced two children, and then Hollywood producer Mike Todd a week after her divorce from Wilding. And after some sluggish work in the early ’50s, she was appearing in some renowned films, notably 1956’s “Giant” opposite James Dean and Rock Hudson. Todd suggested her for the role of Maggie the Cat in “Cat on a Hot Tin Roof” (1958), and Taylor steamed up the screen, spending a good part of the movie slinking around in a slip.

Todd died in a plane crash in March 1958. Upon his death, Taylor was comforted by Todd’s best friend, actor and singer Eddie Fisher. The comforting turned into an affair, complete with bold headlines, which broke apart Fisher’s marriage to “America’s sweetheart,” actress Debbie Reynolds. Taylor was now “the other woman,” scorned as a homewrecker – and, based on box office returns, more popular than ever.

Fisher and Taylor married in 1959 and appeared opposite each other in the next year’s “BUtterfield 8,” with Taylor cast as a sexually carnivorous party girl. Though she disliked the film, her performance – and a sudden case of pneumonia that threatened her life – invited the sympathy of the Motion Picture Academy, and she finally won an Oscar. “I lost to a tracheotomy,” fellow nominee Shirley MacLaine quipped.

In 1960, now perhaps the most famous actress in the world, Taylor was offered the lead in 20th Century Fox’s production of “Cleopatra.” Taylor demanded $1 million – the highest fee demanded by an actress up to that time. Producer Walter Wanger agreed, and the adventure of “Cleopatra” – which would consume the showbiz world in ways unknown in the early ’60s – began. (Fisher’s ex-wife, Reynolds, would become the second woman to make $1 million for a picture.)

The movie seemed gripped by a curse. Taylor’s illnesses – there were more than one – caused delays, forced casting changes and prompting the production to move from London to Rome. The original director, old Hollywood hand Rouben Mamoulian, was forced out and replaced by Joseph Mankiewicz (“All About Eve”). Weather wiped out days of filming and labor unrest undid more, pushing the budget, which was originally about $5 million, to $44 million – almost $300 million in 2010 dollars, more than “Avatar.”

And then there was one of the new actors, Richard Burton, who was cast as Marc Antony when Stephen Boyd had to leave the production.

Burton, who was already known as much for his philandering ways as his Shakespearean expertise, had initially thought little of Taylor beyond her beauty. But he was quickly smitten: “He tried to end it, but he kept turning around and coming back to her,” Mankiewicz’s son Tom told Taylor biographer William J. Mann. “He just couldn’t help himself. He couldn’t get enough of her.”

But America couldn’t get enough of “Le Scandale.” “Cleopatra” actually did well at the box office – though not well enough to immediately escape its red ink: it took three years for 20th Century Fox to make its money back, and Taylor and Burton were now the “It” couple of the moment.

The two married in 1964, their every move a headline. Burton bought Taylor jewels, furs, baubles. The two caused near-riots when they appeared in public. Burton’s tour of “Hamlet” sold out and their movies together – “The V.I.P.s,” “The Sandpiper,” even the grim, groundbreaking “Who’s Afraid of Virginia Woolf” – were hits, the latter also nominated for 10 Oscars. Taylor received a best actress trophy for her performance as the tempestuous Martha; Burton was nominated for his performance as the emasculated George.

Eventually, however, the moviegoing public tired of the double act. Taylor and Burton made four more films together – “The Taming of the Shrew,” “Doctor Faustus,” “The Comedians” and the appropriately titled bomb “Boom!” – but none had the success of their earlier work. At the same time, a new generation was latching on to a younger group of stars; Taylor, though still in her 30s, seemed part of another time.

The actress’ career continued to languish as she entered her 40s. Such films as “The Only Game in Town,” “X, Y and Zee” and “Ash Wednesday” did nothing for her reputation. Her marriage to Burton also faltered; the two divorced in 1974, and though they remarried the next year, the second attempt ended nine months later.

Indeed, Taylor was starting to become a figure of mockery. During a fund-raising dinner for her sixth husband, U.S. Senator John Warner, R-Virginia, Taylor choked on a chicken bone. The incident, including a bulked-up Taylor, was viciously parodied on “Saturday Night Live,” with John Belushi playing Taylor.

But the glamour of being Elizabeth Taylor never faded. She was a “guest” at the much-watched Luke-Laura “General Hospital” wedding in 1983 and launched several perfume lines, starting with Passion later in the decade.

Most notably, however, she devoted herself to charity. In 1985, she organized a benefit dinner to raise money for her friend Rock Hudson, who was dying of AIDS. The project eventually led to the American Foundation for AIDS Research (amFAR); in 1991, she began the Elizabeth Taylor HIV/AIDS Foundation.

Taylor did a handful of parts in the ’90s and ’00s – most notably a 1992 spot on “The Simpsons” in which her voice spoke Maggie Simpson’s first word – but generally devoted herself to social and charitable causes. She married one more time in 1991, to a construction worker named Larry Fortensky, and defended her friend, pop king Michael Jackson. She had more health woes: a trip to the Betty Ford Clinic in the late ’80s – where she met Fortensky – as well as a brain tumor and severe back problems. The latter put her in a wheelchair.

But through all of it – the gossip, the ailments, the loves and losses – she remained indomitable. She even joined Twitter to send regular updates on her life.

Why not? She was born to the spotlight, and no amount of tittle-tattle was going to take it away.

“Some audience out there, and don’t ask me who they are, but there are millions, like scandal. They like filth,” she told CNN’s Larry King in 2006. “And if they want to hear that I’m dead, sorry, folks, I’m not. And I don’t plan on it.”

Vilma back to work after getting hospitalized