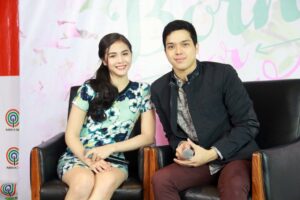 Elmo Magalona is the latest actor to ink a deal with the Kapamilya network.

Magalona signed a contract with ABS-CBN, which includes a television series with Janella Salvador. He will also be co-managed by his mother, Pia Magalona, and Star Magic.

Magalona said he didn’t have a hard time deciding to transfer because he believes ABS-CBN can give him opportunities where he can grow as an actor.

“It wasn’t hard at all because nagkasundo naman,” he said. “More on pinag-usapan po namin ni mom kasi she manages me. It took a while. It was a thinking process pero naging mutual po ‘yung decision namin. ‘Yung offer po yung dumating and I didn’t want to lose the opportunity.”

However, he clarified that he remains grateful to GMA-7.

After his contract signing, Magalona is hoping his career would also take off just like those of other former Kapuso stars who transferred to ABS-CBN.

Meanwhile, Magalona said he is excited to start working with Salvador. The working title of their series is “Born for You” and it will hit the TV screens in 2016.

“Kaka-meet ko lang kay Janella this week and it’s cool na pareho kaming from a family of musicians,” he said.

But is he prepared to compete with other popular Kapamilya love teams?

“May pressure naman po but it’s also exciting kasi the environment is super hungry for a good show, a good challenge. I want to be part of that,” he said. (MNS)