End of an era? Roger Federer ousted in Aussie semifinals 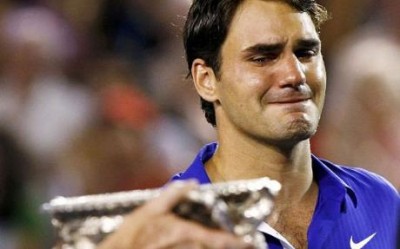 The talk before the tournament was of a blockbuster final between Nadal, going for his fourth straight Grand Slam win, and Federer, who was aiming for his fifth Australian title and perhaps the only player who could stop him.

Instead, after Nadal was eliminated by fellow Spaniard David Ferrer in an injury-induced straight-set loss Wednesday, and now Federer heading home, it will be Djokovic in the final against either Andy Murray or Ferrer-they play their semifinal on Friday.

“I’m looking forward to watching that match tomorrow from my bed with some popcorn,” Djokovic said. “David played a fantastic match against Rafa even though Rafa was struggling obviously with injuries.

“They are in top shape. Andy has been in top shape on this court. It’s a Grand Slam final, anything can happen. I believe in myself.”

The finals scenario could open the door for Murray to become the first British Grand Slam singles champion since Fred Perry in 1936 when the final is played Sunday night at Rod Laver Arena.

“It’s really one of the best matches I’ve played in a while,” Djokovic said.

It is the second straight Grand Slam that Djokovic has knocked Federer out in the semis. At last year’s U.S. Open, the Serbian player saved match points before beating Federer in five sets to advance to the final against Nadal.

The last time Federer lost in straight sets to Djokovic in a major was here in 2008.

Federer won 11 of 14 points to come back from a service break down to take the lead in the second set after the two traded tit-for-tat booming forehands and chip backhands during the opening set. But Djokovic broke back later in the second set and took his power strokes into the third set to win in an even three hours.

It was the 20th meeting of the pair, with Federer still holding a 13-7 edge.

NFL threatened with a work stoppage as deadline looms