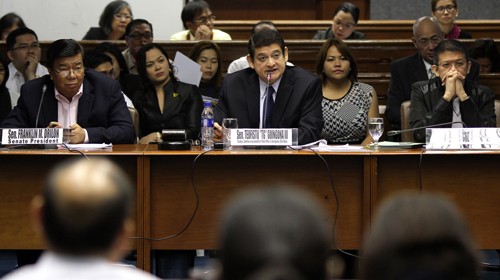 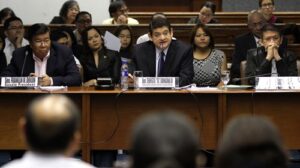 De Lima said the first who would be investigated would be the five lawmakers who had been reported to have channeled their allocations under President Benigno Aquino III’s DAP to Napoles’ foundations.

“We’re investigating that already. The NBI is investigating those… the alleged use of DAP funds through Napoles NGOs, as claimed by (pork barrel fund scam whistleblower) Benhur Luy,” said De Lima.

“All that I am saying is that… that (DAP issue) is being investigated already by the NBI… doon sa five senators,” she said.

The whistleblowers’ lawyer Raji Mendoza was quoted as saying that the affidavits would show that the DAP funds were subjected to the same methods as in the pork barrel scam, wherein billions of pesos in public funds were converted into fat kickbacks for the lawmakers, Napoles, her agents and line agency officials.

“We have the documents on that already. We are evaluating… whether we have cases against those senators and, if confirmed, then what to do about it,” De Lima said.

She added that the Department of Justice would later decide whether to refer the case to the Ombudsman or have the NBI file a separate case on it.

She, however, said she was not yet aware if the NBI had already finished gathering all necessary documents, including a separate sworn statement from Luy on the matter of the DAP.

Enrile, Estrada, and Revilla are all facing separate charges of plunder and graft for the alleged diversion of the millions of pesos of their Priority Development Assistance Fund allocations to Napoles’ NGOs.

De Lima was referring to the high court’s decision last week that declared as unconstitutional acts and practices under the DAP.

She said the investigating panel on the DAP issue was aslo being supervised by Justice Undersecretary Jose Justiniano, who also oversaw the panel separately probing the Napoles-related pork barrel fund anomalies. (MNS)

Miriam: Aquino can be impeached over DAP