Enrique on falling for Julia: Nothing is impossible 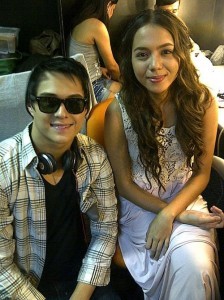 MANILA, June 28 (Mabuhay) -– Actor Enrique Gil said he is open to the possibility of falling in love with actress Julia Montes.

Gil and Montes are the lead stars of the upcoming ABS-CBN series “Muling Buksan Ang Puso.”

“Bukas lahat. Whatever happens, happens. Nothing is impossible,” he said.

Gil also shrugged off an alleged misunderstanding between him and another “Muling Buksan Ang Puso” fellow actor Enchong Dee over the actress.

In a previous interview, Dee himself said he would definitely be happy for Gil if he decides to pursue Montes. “There’s nothing wrong with it if ever that happens,” he had said.

While his past romance with Montes did not end well, Dee said he is happy that he and Montes were able to settle their differences after they reportedly broke up in November even if they never admitted being in a relationship.

Dee said he and Montes continue to maintain a good working relationship and people should not be worried about them sharing scenes together again for their upcoming series. (MNS)