MANILA, April 18, 2011 (AFP) – Philippine Catholics all over the world can now follow the traditional recitation of a day-long prayer of Jesus Christ’s passion over the Internet, thanks to a church website.

The website has all 21-chapters of the “Pasyon”, a Filipino prayer in the form of an epic poem, which is traditionally recited in a non-stop session in many devout Philippine towns during Holy Week.

Officials of the Catholic Bishops’ Conference of the Philippines said Monday they put the prayer online so millions of Filipinos working overseas could still follow the Lenten tradition.

“It is for countries where there are no churches or for seamen. They can pray aloud with the online version even from far away,” said Carmelo Acuna, head of the church project. 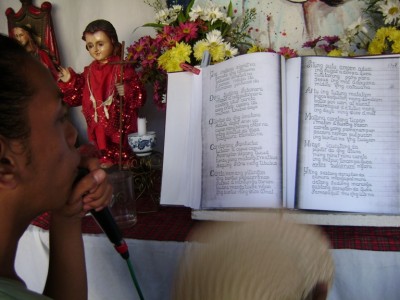 Acuna said the online version is just 20 hours long, relatively short compared to versions used in some villages where the recitation can last for up to three days.

About nine million Filipinos – roughly a tenth of the population – work overseas in sectors, many of them Middle Eastern countries where access to churches is difficult or as seamen on cargo vessels.

The version, available at http://visitaiglesia.net/html/pasyon.html, has all 21 chapters of the prayer sung by an unidentified group of people in Filipino, the native language, with a guitar accompanying them.

The Pasyon, which originated in the 1700s, is normally sang or recited in Filipino communities during Holy Week, often to the accompaniment of musical instruments.