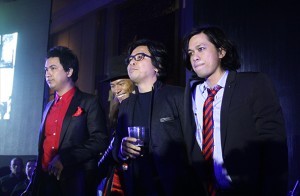 The group – composed of Ely Buendia, Raimund Marasigan, Buddy Zabala and Marcus Adoro – performed together again for the first time since disbanding in 2002.

Eraserheads, whose Esquire cover was unveiled at the event, played some of their most memorable hits, including “Magasin.”

Esquire editor-in-chief Erwin Romulo said they chose the band to grace the cover for one simple reason.

“We were in London and we decided to talk. We got together in a place at Portobelo Road and we started asking ourselves, what would Eraserheads sound like today? And that was the only thing, we wanted to ask that question,” he explained.

And if the reaction of the crowd is any indication, Eraserheads still sounded the way fans loved them through the years.

The crowd could not stop singing along with the band in a night that proved to be momentous for another reason.

“It is a tribute to music in general basically. I mean it’s for OPM because people said OPM is dead,” added Romulo.