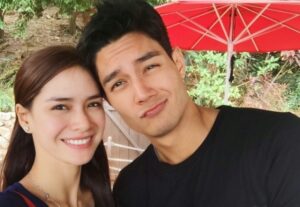 MANILA (Mabuhay) -– Weeks after admitting that they are already a couple, Erich Gonzales and Daniel Matsunaga sat down together to talk at length about how they took their friendship to the next level.

Gonzales and Matsunaga said it was when the Japanese-Brazilian model joined the series “Two Wives” in January that they started to get to know each other better.

At that time, Gonzales was still with her non-showbiz boyfriend although their relationship was already on the rocks.

Despite Gonzales and Matsunaga’s growing closeness, the actress decided not to tell the latter about the status of her love life.

“He had nothing to do with it naman so sa akin lang yun. Ang alam niya okay lang ako, okay lang lahat,” she said.

For Matsunaga, working with Gonzales in “Two Wives” was more on just being professional.

“[Gusto ko na siya] pero alam ko yung walls, what I can and what I cannot. Pero that time was really more on being professional. She was there all the time for me. Our friendship really became much stronger there. We got to know each other better. We were there for each other and we started developing a better friendship,” he said.

Gonzales said it was only sometime after she and her non-showbiz boyfriend broke up that she told Matsunaga about it.

When he learned about the split, Matsunaga said he did not immediately court Gonzales.

“I always said in every interview na God really has his own timing. It’s not something that you have to rush. I never rushed any relationship. I always waited. I just trust, have faith. It really happens in the right time,” he said.

Although they want to keep it private at first, Gonzales and Matsunaga eventually started showing how much they care for each other through their sweet Instagram posts.

Gonzales said it makes her happy when Matsunaga expresses how much he loves her.

Now that their relationship is out in the open, do they see themselves settling down in the future?

Alden Richards, Nadine Lustre open to work on a movie together