Escudero: Red tape should have no place in gov’t 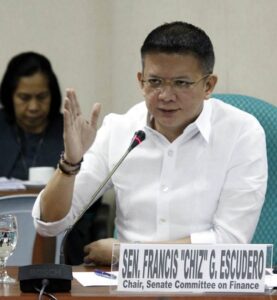 Senator Chiz Escudero, chair of the Joint Oversight Committee on Public Expenditures, conducts a hearing today on the report of the Development Budget Coordinating Committee on the status and direction of the economic, fiscal and monetary policies of the government. Also in photo is Davao City Representative Isidro Ungab.(MNS photo)

MANILA (Mabuhay) – Senator Francis “Chiz” Escudero is urging the government to further streamline state agencies and offices whose functions are “teeming with duplication” to improve the budgeting process and public service delivery.

He said the national government should go beyond allocating funds and work harder to plug the loopholes in the budget process that prevent it from delivering basic services to the public in a timely manner.

“An audit and analysis of the process of planning and budgeting will reveal the overlapping of functions of some government agencies. The government needs to close the gaps and fix the bottlenecks,” Escudero, chairman of the Senate committee on finance, said in a statement on Tuesday.

Some issues within government agencies, such as reporting of field data and jurisdictional conflicts among different offices under one department, he said, impede the swift delivery of basic services.

“In the end, project implementation suffers and Filipinos don’t get the services they need and deserve,” said the senator.

Escudero also shared the observation of the International Monetary Fund (IMF) that the Philippines needs to improve its unusually complex budgeting system and address the weaknesses in the quality and integrity of the country’s fiscal data, partly reflecting multiple agencies having responsibilities for fiscal reporting.

“The accurate reporting of public finances is a foundation of sound planning and project implementation. But sometimes, we don’t get quality data because there are issues at the agency level,” he pointed out.

As head of the finance committee, Escudero said he implemented a number of streamlining activities, including a detailed listing of farm-to-market road projects under the Department of Agriculture to avoid overlapping with the Department of Public Works and Highways.

The senator also pushed for a uniform formula for the fair and equitable distribution of Emergency Shelter Assistance funds for typhoon-affected local government units to prevent uncoordinated and ineffective response initiatives.

But while the Aquino administration has adhered to a national policy of good governance, Escudero said “much   work still needs to be done to reform the government because good governance is always a continuing concern.”

“Streamlining the bureaucracy is, by itself, a monumental task. But it is also a critical component of national reform,” he said.

“The government needs to do something to eliminate bureaucratic red tape, which gets in the way of delivering basic services such as education, health and housing,” the senator added.

Escudero said his committee will scrutinize the administration’s proposed P3.002-trillion national budget for 2016 in order to determine its spending plan, assess the implementation of current projects and arrest underspending.

Malacañang is expected to submit the budget proposal to Congress on July 28, a day after President Benigno Aquino III delivers his final state of the nation address. (MNS)

Paper or Plastic – How About Neither?