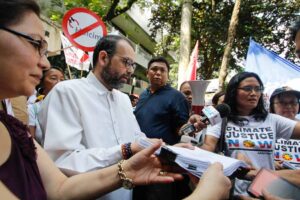 MANILA (Mabuhay) – Senator Francis “Chiz” Escudero is proposing the creation of an interagency body to study and address the impacts of El Niño on farmlands and households which are now experiencing water shortages.

Escudero said the inter-agency body should be composed of representatives from the National Irrigation Administration (NIA), National Water Resources Board (NWRB), Department of Agriculture (DA), Department of Energy (DOE), Department of Environment and Natural Resources (DENR), Philippine Atmospheric, Geophysical and Astronomical Services Administration (Pagasa), Climate Change Commission, private water concessionaires, and other experts that might be able to help the government craft an easily implementable plan on El Niño.

“We must convene an inter-agency body to map out the situation in El Niño-affected areas and propose viable solutions to the expected short-term, mid-term, and long-term effects of El Niño,” he said in a statement on Friday.

“Water interruptions and shortages are already disrupting the day-to-day activities of Filipinos. The condition of waterless hospitals and health facilities is a major source of concern as early as now,” added the senator, who chairs the Senate committee on environment and natural resources.

Pagasa has warned that this year’s El Niño event is expected to be among the worst in history, causing 60 to 80 percent reduced rainfall until early next year. It is expected to affect 79 of the country’s 81 provinces.

But Escudero said the El Niño phenomenon was slowly transforming the issue of reliable access to water supply, noting the ongoing discussions between water concessionaires and select groups in the agricultural sector.

There are reports, he said, that farmlands in Bulacan and Pampanga would not receive water allocation for irrigation until May next year. Parts of Zamboanga and Caraga, he said, have also experienced water shortages since early this year.

The senator also noted that there has been already reduced water allocation for domestic use in Metro Manila from 41 to 36 cubic meters per second (cms) and is eyeing further reductions of 1 cms every month until February, depending on the water level in Angat Dam.

“Something is terribly wrong in a country where an ordinary worker could not take a bath before going to work due to El Niño, wastes hours on the road due to gnarled vehicular traffic and arrives at his workplace without electricity. Is this what Filipinos get for paying such huge taxes?” Escudero asked.

To address the problem, he said, government agencies should present “well-thought out contingency measures to alleviate the difficult living conditions in the country, which will be exacerbated by water shortages and power interruptions.”

Escudero, who is running for vice president in 2016, expressed concern that the problem of insufficient water supply might fall on the sidelines as election fever hits many government officials.

“An inter-agency body will ensure that someone is always on top of the problem. Water is vital to our everyday life, and we cannot allow the lives and businesses of millions of Filipinos to cease while government officials are busy with their political plans,” he said. (MNS)

Citroen to crowdsource its concept car