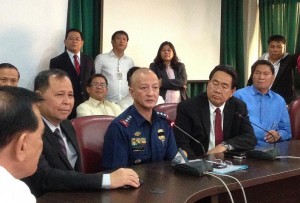 MANILA (Mabuhay) – After saying that the national police force is in crisis after the Mamasapano carnage, Philippine National Police (PNP) officer-in-charge Leonardo Espina on Thursday said the PNP needs to move forward and focus on hunting the terror suspect who got away.

In a press conference,

Espina debunked insinuations that the PNP and Armed Forces of the Philippines (AFP) are at odds following accusations of no coordination during the Mamasapano operation to hunt down Zulkifli bin Hir, alias Marwan.

He assured the public that the PNP is fine and its relationship with the military is very strong.

“We assure everybody that we are all okay. The PNP, our relationship with the AFP, remains very, very strong, and both organizations will continue to serve the people as we are mandated to do and as we are expected to do,” he said.

The police and military organizations have come under pressure after 44 police commandos were killed in the Mamasapano, Maguindanao operation to hunt down Marwan.

On Wednesday, AFP Chief of Staff Gen. Gregorio Catapang said they could not respond immediately to the distress call of the police commandos who were being attacked during the Mamasapano operation.

“We did not know the exact place where the forces had to be extricated… they were not telling us their exact location so it was difficult,” Catapang has said.

The US Federal Bureau of Investigation earlier confirmed that a DNA sample provided by Philippine authorities most likely came from Marwan.

A second target, Basit Usman, was able to escape in the firefight.

Espina said there is no need to do a loyalty check among the troops amid Napenas’ revelation that he directly coordinated with suspended PNP chief Alan Purisima for the Mamasapano mission.

It was Purisima who told Napenas not to tell Espina beforehand about the mission until it was well underway.

Espina had said he belatedly knew of the operations.

“We don’t need a loyalty check, because we are all loyal. We are not hiding the fact that we are affected from the incident, but we can only move forward. The only way we can be professionals is to pay respects to our fallen heroes,” he said.

He said there is no “creeping division” within the police.

As it is, plans are now underway to determine the whereabouts of Usman, he said.

Meantime, Espina said the PNP is just awaiting the results of the probe of the Board of Inquiry before they can initiate charges, both administrative and criminal.

“We will find out after the operational audit as to who should be culpable and liable. We will file charges against everyone,” Espina said.

He said the Board of Inquiry is expected to finish its probe before the end of the month.

“I’d like to reiterate that the Board of Inquiry is independent from me. [Director Benjamin Magalong] told me they will be getting my statements. I’d like this to be a very truthful inquiry,” he said. (MNS)

US marines in typhoon rescue race