Espina tells BOI to refuse pressure, stick to the facts on Mamasapano incident 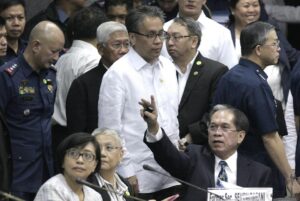 MANILA (Mabuhay) – Philippine National Police officer-in-charge Deputy Director General Leonardo Espina on Wednesday reminded the members of the Board of Inquiry investigating the bloody Jan. 25 Mamasapano clash to stay true to the fact, and not be swayed by pressure.

“Fact-finding iyon, it should devoid of emotions,” he added.

He also said the members of the BOI may use his name for protection from any pressure and threats.

He said the public should wait for the actual release of the report before making any whitewash assumptions.

However, he admits that he is expecting that there would be some who will not be satisfied with the results.

“There is no setting of influence,” he said, adding that members of the team will not allow their credibility be tainted.

Meanwhile, asked if the report will be released to the public, Espina said it will be up to the BOI or higher officials.

But he said he would personally want this to be released.

“Depende sa higher ups. Pero fact-finding ‘yan so for me personally, everybody should be informed. So everyone would know the facts,” he added.

He also explained that “for the purpose of passing through the chain of command,” it will be passed to him before submitting to Interior Secretary Mar Roxas, then to President Benigno Aquino III.

He, however, stressed that he will not be changing anything on the report. (MNS)

Bongbong Marcos: NP still undecided whether to field standard-bearer in 2016