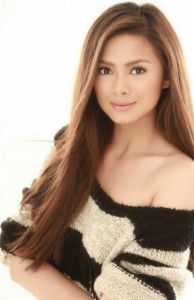 “Acting wise, I really want to do something challenging. I want to do a soap or any show na masusubukan ko yung sarili ko and because I’m 18, there’s a lot of new things I can do now on television,” said Eula, who is slated to do an independent movie this year.

Before playing the titular character in fantasy series “Cassandra: Warrior Angel,” Eula admitted her past shows were only preparations for “something big.”

“I just started in the real game in the industry since I’m just launched in ‘Cassandra.’ It’s the start of something real, something challenging. Before this kasi, everything is very light. Ngayon pa lang talaga ako nag-uumpisa,” she said.

As to the birthday party, she said it’s a happy celebration.

Eula said she’s overwhelmed with the support and love shown by the network since winning talent search “Star Factor” in 2010. She said TV5 allowed her to spend time with family on her birthday last May 23.

“Yun na nga ang pinakamalaking gift na maibibigay nila sa akin kasi I really don’t get to spend that much time with them,” she said.

She went to Tagaytay to have lunch with her parents and siblings, followed by a small gathering in Sofitel Philippine Plaza with her extended family.

Eula’s parents flew from Cebu just to be on her special day. (MNS)

Carmina wants to take a break from ‘contravida’ roles