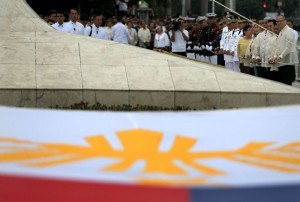 MANILA (Mabuhay) — A private individual on Tuesday filed graft and plunder charges with the Office of the Ombudsman against former Makati Vice Mayor Ernesto Mercado for the P80 million the official admitted to have received from Vice President Jejomar Binay as bribe.

Louis “Barok” Biraogo, who is originally from Davao City and currently working in Sta. Rosa, Laguna, said he has no other evidences aside from the transcript where Mercado admitted at a Senate blue ribbon committee hearing that he received P80 million from Binay.

“Walang ibang nagsasampa ng kaso,” he said, when asked why he filed the complaint.

Mercado earlier said he received the amount as bribe for all the transactions he did for Binay.

“That is an admission against interest, and that should be enough evidence to warrant the filing of a case of plunder against him,” Biraogo said.

Biraogo also clarified that he has no connection with the Binays, noting that he filed a petition before the Supreme Court to compel the Commission on Elections (Comelec) to bar members of political dynasties — including the Binays — from running in the 2013 elections.

Mercado is under the witness protection program of the Department of Justice, after linking Vice President Jejomar Binay to alleged corruption in Makati City.

Mercado accused Binay of involvement in the alleged overpricing of the construction of the Makati City Hall Building II. He also said the vice president was behind bid rigging and received kickback for every transaction entered into by the city government during Binay’s term as mayor.

He also accused Binay of owning a 350-hectare property in Rosario, Batangas and a log cabin in Tagaytay Highlands.

Binay has since denied the allegations, saying these were part of the operation to discredit him and diminish his chances of winning in the 2016 presidential elections. (MNS)