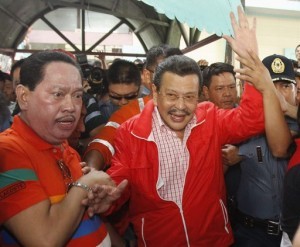 On Tuesday noon, Lim filed his certificate of candidacy (COC) for Manila mayor at the Commission on Elections (Comelec) office in Arroceros, Manila.

Estrada won over Lim during the 2013 mayoral race. Lim’s camp then filed a disqualification case against Estrada, but this was junked by the Supreme Court via an 11-3 vote in January.

Estrada has yet to file his COC.

Meanwhile, Lim was joined by Manila 1st District Rep. Benjamin “Atong” Asilo, who will be the former’s running mate.

Lim served as Manila mayor from 1992 to 1998 before attempting to run for presidency and serving as the Interior and Local Secretary from 1998 to 2001.