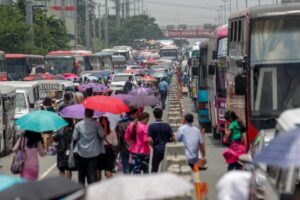 Members of the Iglesia ni Cristo bound for Ciudad de Victoria in Santa Maria, Bulcan alight from their vehicles at the North Luzon Expressway to walk after the volume of vehicles traveling the expressway created a monstrous traffic jam, blocking the expressway for hours on Sunday. (MNS photo)

MANILA (Mabuhay) – Isaias Samson Jr., former editor of “Pasugo,” the official publication of the Iglesia ni Cristo, is facing a libel complaint, following his expulsion from the church.

It is set for raffle this week.

Iglesia ni Cristo spokesman Edwil Zabala said he “could not confirm nor deny” the filing of the complaint. He said he has been busy with the church’s centennial closing ceremonies during the weekend.

Samson, along with his family, was expelled from Iglesia ni Cristo last week for his refusal to submit to the authority of the church.

The former minister claimed he was illegally detained by the church’s Sanggunian.