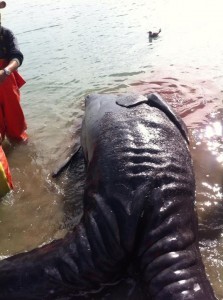 The four-meter (13-foot) long siamese whales were dead when they were found in the Ojo de Liebre lagoon, which opens to the Pacific Ocean in the Baja California peninsula.

Officials from the National Natural Protected Areas Commission (CONANP) verified the discovery during a visit on Monday.

The nearly half-ton creatures were linked at the waist, with two full heads and tail fins, said Benito Bermudez, a marine biologist and CONANP’s regional manager.

He described the discovery as “exceptionally rare, without any precedent” in the region.

Scientists are examining the whales and plan to look for any other cases in the gray whale’s natural sanctuaries off Baja California.

Every winter, hundreds of gray whales migrate from the Bering Sea to the warmer waters of Baja California, attracting tourists hoping to catch a glimpse of the animals.