MANILA, November 23, 2011 (AFP) – Tens of thousands of sympathetic Facebook users helped reunite a Philippine grandmother with her 78-year-old husband who went missing for two weeks, the family said Wednesday.
A black-and-white picture of a forlorn Aurelia Matias, 73, sitting on a street corner with a missing persons poster on her back, went viral after an amateur photographer posted it on the popular social networking site on Monday.
Police had failed to find Luis Matias, 78, who suffers from memory loss, after he walked out of his Manila home on November 11, but he was located within two days of the Facebook post, his daughter Norma Avancena said.
â€œWe donâ€™t even know how to use Facebook, but it was such a big help to us and we thank the person who took my motherâ€™s picture and posted it,â€ Avancena, 48, told AFP a day after her parents were reunited.
â€œMy mother was overjoyed. She had almost lost hope that she would ever find him again.â€
The husband, a retired waiter, was found sitting atop a flower box less than half an hourâ€™s walk from home after a member of the public tipped off a radio station, one of many that latched onto the Facebook story.
The post was shared nearly 61,000 times.
â€œMy mother is a thoughtful person. She has been bathing him, cooking for him, feeding him, and changing his diapers ever since he lost his ability to take care of himself. He was her first love,â€ the daughter said.

Aurelia was reportedly quoted as saying, “Hindi lamang gusto siyang mahanap. Gusto ko pa siyang pagsilbihan (I wanted to find him; because, more importantly, I still want to serve him.” Her statement of fidelity poignantly touched the hearts of people who cannot find love in marriage. 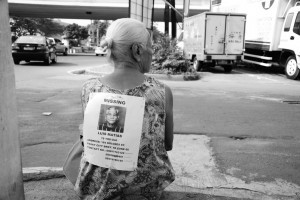 Lola Aurelia: "I still want to serve him..." FB PHOTO BY REDDIE J'S

The photographer, who calls himself Reddie Js, recounted his chance meeting with the frail, white-haired woman, a street vendor, on his Facebook site: â€œI was… pained to see her looking for him in that manner, so I decided to help.â€
Global surveys have consistently placed the Philippines, a nation of 94 million people, as among the worldâ€™s top 10 nations in terms of Facebook use.

NEW REQUIREMENTS FOR HIRING A WORKER