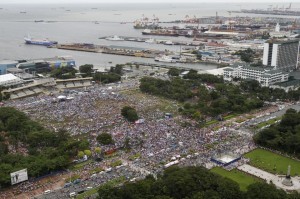 Thousands gather against the alleged misuse of the Priority Development Assistance Fund (PDAF) or pork barrel of lawmakers in front of the Quirino grandstand at Rizal Park, Manila on Monday (August 26, 2013). (MNS photo)

MANILA (AFP) – Tens of thousands of people gathered in a central Manila park on Monday to protest against embedded corruption in the Philippine political system after a rallying call on Facebook and Twitter.

The so-called “million people march” is one of the largest public demonstrations since President Benigno Aquino was elected in 2010 on an anti-corruption platform.

The protesters ranged from nuns and priests and students to businessmen, middle-class families, lawyers and other professionals, showcasing the broad-based anger over graft in the impoverished nation.

“The Filipino people are now modern. Proof is the million people march that we can’t be fooled by our leaders anymore,” a protester calling himself Gundam08 tweeted from the rally site.

Government officials’ misuse of funds has been long embedded and practically accepted in the Philippine political system but a series of newspaper articles, like about how government funds were allegedly diverted into private hands, have stirred new anger outside of the usual protest groups.

The calls for the protest began circulating on Facebook and Twitter about two weeks ago after reports in the popular Philippine Daily Inquirer of an alleged scam involving legislators’ Priority Development Assistance Fund (PDAF).

The PDAF is money allocated for lawmakers to be used in their pet development projects. Critics see it as funding “pork barrel” projects which have traditionally been a source of corruption.

At the centre of the controversy is a woman the newspapers reported to have allegedly connived with legislators to siphon off some 10 billion pesos ($230 million) from the fund.

Aquino had previously expanded the PDAF under his 2014 budget so that each senator will receive 200 million pesos ($4.5 million) while each member of the House of Representatives gets 70 million pesos for their “pork barrel.”

But in the face of growing anger earlier this month, he had suspended the releases of money and vowed to reform the PDAF system.

The protestors, carrying signs saying “Abolish pork barrel” and “Change the culture of political patronage,” were peaceful even if they appeared to have no leader, said national police spokesman Senior Superintendent Reuben Sindac.

“It’s a very respectable gathering. There are families here like a picnic. They are policing their own ranks. This is purely social-network propelled,” he told AFP while monitoring the rally.

Of the huge crowd at the Luneta Park, only a few hundred were from the leftist protest groups that usually lead such street protests, he said.

Similar rallies were being held in public parks throughout the country, Sindac said, adding they were also peaceful.

US citizenship? For certain people no english…no problem

Seven out of 10 Pinoys expect a happy Christmas – SWS