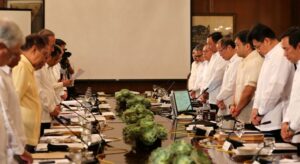 MANILA (Mabuhay) – Enterprising racketeers are taking advantage of the unabated cargo congestion in the ports of Manila, charging businessmen exorbitant fees in exchange for facilitating the release of their shipments, a lawmaker claimed on Monday.

“Huge ‘facilitation services’ fees are being charged businessmen who are helpless and desperate in seeking the release of their shipments,” Albano said in a statement.

According to the lawmaker, the Port of Manila remains congested despite the lifting of the truck ban imposed by Manila mayor Joseph Estrada last year.

The accumulation of cargoes at the port has resulted in multi-billion peso losses for businesses and industries, he said.

“[The port congestion] results in higher costs for businesses relying on imported finished products for local distribution and manufacturers who need a steady supply of imported raw materials to keep their factories and production lines running,” Albano said.

The lawmaker said he will ask Congress to investigate the port congestion in Manila to shed light on the situation and the steps the Bureau of Customs are taking to address the problem.

He claimed that the port congestion has aggravated corruption and extortion at the BOC, since the operators of “facilitation services” are supposedly in cahoots with Customs officials.

“The longer these cargo shipments are kept in the storage, the opportunities for graft and corruption become bigger and wider for unscrupulous ‘cargo release facilitators’ whose operations would not be possible without the connivance of some corrupt Customs officials,” Albano claimed.

While the Isabela lawmaker slammed BOC for its “lack of planning and foresight” in dealing with the accumulation of cargo at the ports, he said the problem can no longer continue since businesses have been racking up huge losses with the delay in the arrival of their shipments.

“We cannot allow this policy where businesses are made to suffer huge losses directly due to the congestion in the ports that delay the release of their cargo or shipments and – ultimately, bigger losses to manufacturing industries  due to delays in their production and distribution lines,” Albano said.

“[The port congestion] adversely affects the national economy as it slows down business activity in various industries,” he added.

Last September, the National Economic Development Authority said the country lost around P70 billion over a six-month period due to the port congestion problem in the capital. (MNS)