Families to ‘Walk n’ Roll’ on Sept. 20 for ataxia that afflicts many

Fil-Ams among victims of debilitating disease

If not for the universal campaign of the Ice Bucket Challenge, the Amyotrophic lateral sclerosis (ALS) or Lou Gehrig’s disease may have been just that – a disease that has no cure. Now, ALS is known worldwide. But unknown to many, another debilitating disease that affects many, including the young, also needs the same kind of attention and because it is passed from one generation to another.

On September 20, American families, their relatives and friends, and advocates will do just that. They will troop to the City of Long Beach to participate in the Sixth Annual LA/OC Walk n’ Roll for Ataxia so more people may be aware of an unfamiliar neurological disorder called ataxia, which simply means “lack of coordination.”

Starting from 340 S. Pine Avenue, the Saturday 1K Walk n’ Roll for Ataxia Awareness in Long Beach at the Aquarium of the Pacific area will coincide with the International Ataxia Awareness Day.

Personally, I know people here in Southern California who have been suffering from ataxia or the lack of muscle control caused by the disease. One is close to Balita family and her name is Moira, whose mother, Saira Velasco, better known in the Philippine celebrity world as Bunny Paras, used to be our Advertising Manager for the Motoring Section. Saira had to semi-retire to focus on her daughter, who was diagnosed with the disease four years ago. Moira is only 15.

Two other friends of mine, back from my Novaliches days – the former Pamela Jacob who is now known as Pamela Ching, and her sister, Aileen Jacob – are both suffering from ataxia. To be more specific, theirs is the SCA7 type (spinocerebellar ataxia; there are several types). And that is not all. There’s more in their family.

Pamela’s twins – Catherine Joyce and Clarissa Janelle, aged 27 – are also both suffering from ataxia. But that is not the worst part. Pamela and Aileen lost a brother, Manuel “Boyet” Jacob, who died from it. Also a friend of mine, Boyet introduced me to the game of baseball, which we used to play in front of their house. As if this wasn’t enough, Aileen’s daughter also died from the disease last year. She was just 21.

To quote Pamela’s aunt, which Pamela posted on her Facebook Page, “It is truly inspiring that the ALS foundation fired up the people’s sense of generosity, but every time I see an ice-bucket challenge, I can’t help but feel a tug in my heart…a certain sadness actually because it is a reminder that to this day, another debilitating disease called Ataxia stays forgotten. It is too close to home for me – my cousin, her two daughters and three granddaughters are all afflicted with this progressively worse disorder.”

She continued, “It would mean the world to them if more people were aware of not only its existence, but the overall impact it has on the people who have it and their loved ones who witness its effects on a first-hand basis. Unfortunately, the medical community has not pursued any aggressive or significant research to find cures or relief for this disease. The biggest roadblock is the lack of awareness and funding. Let this be my personal rally and appeal to you to join us in the Walk n’ Roll to Ataxia and/or donate to help spread the knowledge of this all-too-common disorder that’s too commonly slipped under the rug.”

According to ataxia.org.uk, SCA7 is a type of inherited cerebellar ataxia. “It is caused by a defect in a gene. This results in damage to certain parts of the brain and to the eyes.” Pamela’s sister, Aileen, apart from not being able to walk anymore (I used to dance with her in parties when we were young), has also lost her sight.

In Saira’s daughter’s case, Moira, she suffers from another type – Friedreich’s Ataxia – a progressive disorder “mainly affecting the nervous system…of the spinal cord.”

Saira posted on her Facebook page this message: “As many of you may know, our daughter Moira was diagnosed with ataxia four years ago. I want to first of all thank you so much for your thoughts and prayers – your support has given us strength and hope for the future. We are attending the annual Los Angeles/Orange Country Ataxia Walk for awareness and donations that go towards a cure. If you have time please feel free to join us for the stroll along the bay next to the Long Beach Aquarium. And if you can spare a little to donate towards a cure, we’d appreciate it. Also, the more money we raise, the more tickets Moira gets to win prizes in the raffle after the walk!” Saira also posted videos of Filipino celebrities expressing their support and their generosity.

The ALS Ice Bucket Challenge has raised over $100 million in just a few weeks. And to think that many just donated $5 when they doused themselves with ice-full of water. In spite of the physical challenges, the organizers hope the walk make more people become aware of ataxia and to raise more funds for research. If you know something as creative as the Ice Bucket Challenge, you are more than welcome to share your talent with them to make this a reality. 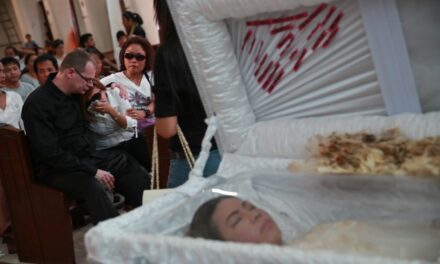