After a year following her â€œTaking Chancesâ€ world tour that brought her to 25 countries, the five-time Grammy Award winner is back in Las Vegas for another three-year gig, which started last March 15, 2011. And guess what? There is, again, a celebration in Vegas, as Celineâ€™s fans form and endless line leading to the Colosseum at the Caesars Palace. It is like 2003-2007 all over again, when Celine had the 4,300-seat filled every â€œnew dayâ€ she performed.

â€œItâ€™s the show of shows, and may not be matched in Las Vegas for a long time!â€ wrote the Las Vegas Review-Journal.

Her triumphant return to Las Vegas is seen as a boost to the sagging tourist traffic at the Strip. This time, Celine performs with 31 musicians, consisting of orchestra and band. Her repertoire runs the gamut of songs by Ella Fitzgerald, to Billy Joel, to Michael Jackson. Back-up dancers there are none, but the stage production is bedazzling as it is awe-inspiring.

â€œCeline Dionâ€™s Vegas show more spectacular than ever!Â Â  If her last show sold out for five years, this one should make it for ten,â€ says theÂ Toronto Star.

Celine makes it a point that she gets connected to her audience during her performance by talking to them. During the June 29 show, Celine took time to acknowledge the people who were instrumental in bringing her back to the same stage where she brought about â€œNew Dayâ€ to the annals of Las Vegas entertainment history. The Newsweek even went far as saying that Celineâ€™s Vegas act is the â€œbiggest since Elvis.â€

A montage of video snippets of what she did during the world tour and her family. She chuckled at the thought that she can keep up with family life despite the career that brings her to every continent of the world, telling her fans, â€œDespite all these, I can still do what I love do â€“ sing for you.â€

As a singer, Celine has accomplished what others could only dream of. She boasts of a career that has been feted 1,000 times over. Her success in the pop music history is validated not awards and acclamation, but also in the 200 million of her albums sold all over the world. Caesars Palaceâ€™s website has it that the Canadian singer is a five-time Grammy Award winner, including Album of the Year and Best Pop Album for Falling Into You (1996); and Record of the Year and Best Female Pop Vocal Performance for â€œMy Heart Will Go Onâ€ (1998). Her recordings have won two Academy AwardsÂ®: Best Original Song in 1992 for the title song of Beauty and the Beast (with Peabo Bryson), and Best Original Song in 1998 for â€œMy Heart Will Go Onâ€ (From Titanic). She has earned seven American Music Awards, 20 Juno Awards (Canada) and an astonishing 40 Felix Awards (Quebec).Â www.celineinvegas.com

As if those were not enough, Celine was honored with the Diamond Award at the World Music Awards in 2004 to recognize her high perch in the industry as the best-selling female artist of all time. And then, in 2007 she was accorded the Legend Award, a recognition of her outstanding contribution to the music world. 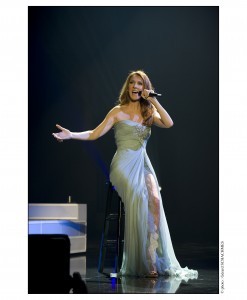 â€œCeline Dionâ€™s Vegas show more spectacular than ever! If her last show sold out for five years, this one should make it for ten,â€ says the Toronto Star.

â€œItâ€™s the show of shows, and may not be matched in Las Vegas for a long time!â€ â€“ Las Vegas Review-Journal

â€œCeline Dionâ€™s Vegas show more spectacular than ever!Â Â  If her last show sold out for five years, this one should make it for ten.â€ â€“Â Toronto Star