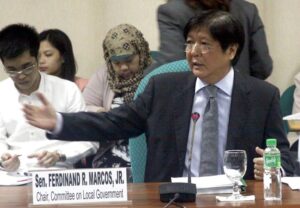 MANILA (Mabuhay) — Sen. Ferdinand “Bongbong” Marcos Jr. was not able to attend an event at the Polytechnic University of the Philippines (PUP) in Sta. Mesa, Manila, Monday morning due to food poisoning.

The students waited for the arrival of the senator for an hour before his entourage, led by his son Ferdinand Alexander Marcos, arrived around 11:30 a.m.

The younger Marcos faced the students and explained to them why his father couldn’t come.

“As you can see, I’m not the senator. Unfortunately, my father fell sick this morning after I took him out for a Father’s Day dinner last night. He was a victim of food poisoning. He was not able to make it this morning,” he said.

The elder Marcos was supposed to conduct a consultation with PUP students regarding the proposed Bangsamoro Basic Law scheduled at 10:30 a.m.. He chairs the Senate local government committee deliberating on the BBL.

Ferdinand Alexander then proceeded to read the speech his father was supposed to deliver, sometimes eliciting laughter from the audience due to his accent.

Ferdinand Alexander is a student in Britain. (MNS)