It took more than half a century before someone realized that fathers too need to be remembered for their contributions in the family like mothers whose day was commemorated last month. A Civil War veteran widower, William Jackson Smart, who raised his six children by himself after the death of his wife giving birth to their sixth child  is to be credited for this special day of remembrance. 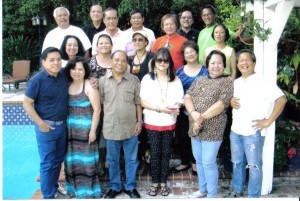 BARANGAY OLYMPIA (MAKATI): Former residents of Barangay Olympia in Makati, Philippines and are now residents of California will reunite this Sunday at the Fullerton residence of Orange County Realtor Nick Enciso in the City of Fullerton to “relive and reminisce the good old days in their home barangay”.
Photo: Barangay Olympia

Father’s Day was founded at the Young Men’s Christian Association in Spokane, Washington on June 19, 1910 by Sonora Smart Dodd.

Three different people shared the honor of inventing Father’s Day celebrated on the third Sunday in June to honor of millions of fathers in the United States. While the first Mother’s Day was first celebrated in May 1914 by virtue of President Woodrow Wilson’s proclamation, Father’s Day did not come to be until 1966.

The History of Fathers Day

Inspired by her Pastor’s sermon on the newly established Mother’s Day, the daughter Sonora Dodd suggested to her pastor “that there should also be a day to celebrate Father’s day”  and suggested June 5, her father’s birthday to be the day.  The day was too soon for the pastor to prepare a sermon on her request and suggested instead that he did it on June 19, the third Sunday of the month.

Dodd spent years promoting the celebration of Fathers Day nationally. She sought the help of the manufacturers of goods for men, makers of ties, tobacco pipes and other gifts suitable for honoring fathers for her idea.  Many Americans believed then, as many still do today, that there’s to much commercialism attending the celebration the Fathers Day and “was just another way for retailers to make money after the popularity of Mothers Day” that led to the successful sale of gifts for mothers.

BUENA PARK TENNIS CIRCLE TOURNEY: Circle: One of the most active tennis clubs at the Boisseranc Park in Buena is the Buena Park Tennis Circe whose membership continues to grow under the leadership of Cesar Ramico, Coordinator: Rico Taruc, Public Relations Officer, and Rey Surambao, Finance Officer. An on-going tournament, one that comes on the heels of the previous successful tourney, will keep the members busy for the days ahead wielding their tennis racquets.

To help with the promotion of Fathers Day, the New York Associated Men’s Wear Retailers organized  a Father’s Day Council in 1938 amidst the public resistance on the idea as another money making project.

A Bill had been submitted to Congress for an official national recognition of Fathers Day as early as 1913. Three years later, President Woodrow Wilson vigorously promoted to make Father’s Day official, but he could not muster enough support from Congress. In 1924, President Calvin Coolidge recommended that Father’s Day be observed by the nation, but did not go so far as issuing a national proclamation.

It was in 1957 then Senator Margaret Chase Smith of Maine wrote in a proposal accusing Congress of ignoring fathers for 40 years while honoring mothers, and  “singling out just one of our two parents”.

What is a Chapter 13 Bankruptcy?