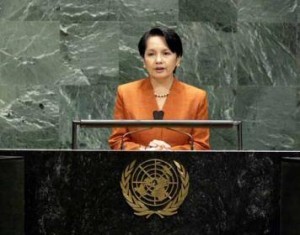 Aside from violation of Republic Act 3019 or the Anti-Graft and Corrupt Practices Act, Arroyo, who is currently confined at the St. Luke’s Hospital in Taguig City, was also charged with malversation of public funds.

“As was evident in the Senate hearings, what we have with the PCSO intelligence funds is a very systematic and thorough effort through which the previous adminsitration and its henchman in PCSO robbed the most needy Filipinos from what should have been their lifelines,” Hontiveros said.

“For this, Gloria deserves to languish in jail for life,” she added.

The complainants said they were also seeking the suspension of the respondents who are still holding public office to this day.

Aside from Arroyo, also named respondents were:

On Monday, however, Arroyoâ€™s legal spokesperson, Raul Lambino,dismissed the planned plunder case against his client as a mere â€œpublicity stunt.”

â€œJust like their patron in Malacanang, they resort to political propaganda over the media to advance their respective agendas by incessant shame campaign and vilification against Arroyo,” Lambino said.

What they can’t prove in the impartial courts for lack of solid evidence to support their case, they resort to a trial and condemnation by publicity against her,” he added.

“We do not know if she has officially assumed office, but the President already announced her appointment yesterday so we are considering this case to have been filed under her term,” Hontiveros told GMA News Online.

The former party-list lawmaker also expressed hopes that the newly appointed Ombudsman would will be “with us on this matter.”

“I hope she doesn’t mind that even as we welcome her appointment we already filed this case. Alam namin naghahanda pa lamang ang tanongbayan but I hope she understands that the momentum to pursue all plunderers including Gloria mut be sustained,” Hontiveros said.

According to Akbayan, this is so far the fifth plunder case Arroyo is facing since she left MalacaÃ±ang, the first being the one filed August last year by Danilo Lihaylihay, a private citizen who claimed to be an anti-corruption advocate.

Lihaylihay claimed that the former President and three other former Cabinet officials committed plunder over the allegedly anomalous sale of the old Iloilo airport property in 2007.

A second plunder complaint was filed last April 26 against Arroyo and for other public officials under her administration of â€œsystematically” orchestrating the diversion and misuse of over P550-million worth of funds from the Overseas Workersâ€™ Welfare Administration (OWWA) for â€œquestionable” acquisitions, which supposedly did not benefit OFWs.

Arroyo allegedly authorized in March 2003 a request from Romulo to release $293,500 (about P16.5 million at that time) from OWWA funds supposedly to fund â€œpreparatory activies” of the Philippine post in Kuwait.

The amount also allegedly covered the purchase of vehicles for posts in Lebanon, Oman, Jordan, Bahrain, Egypt and Iran in support of the United States-led war in Iraq.

Aside from these, about P5 million from OWWA funds were also released by the Arroyo government in May 2003 supposedly to fund the operating expenses of humanitarian assistance task force to Iraq.

The complainants also accused Arroyo of authorizing the transfer of P530 million in OWWA funds to provide health insurance cards to eight million indigents a year before the 2004 national elections. (MNS)