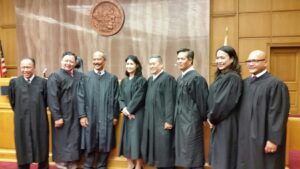 LOS ANGELES – The newest Filipino-American judge in the Los Angeles Superior Court was formally honored in a historic swearing-in and enrobing ceremony at the Stanley Mosk Courthouse in downtown Los Angeles earlier this week.

Julian Recana made history when he was named judge by California Governor Jerry Brown last month. He and his father, LA Superior Court Judge Mel “Red” Recana, became the first Fil-Am father and son judges to serve in the California judiciary.

“This is a dream-come-true for a father,” Mel Recana, who was appointed by Brown to the LA Superior Court 34 years ago, told this reporter.

“Instead of pride, what I feel is humility and gratitude. I thank the good Lord and the people who helped us.”

“This is life changing for me,” said Julian Recana in his remarks at the ceremony held on Thursday.

He thanked his father for coaching and inspiring him. 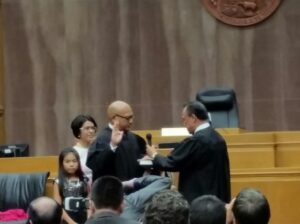 Judge Julian Recana is sworn in by his father, Judge Mel “Red” Recana as his wife Alexis, with daughter Julia, looks on.

“I feel so proud to be a Filipino-American right now,” Julian said later in an interview.

The emotional ceremony turned out to be a celebration of family. Julian was sworn in by his father, Mel. He was enrobed by his wife, Alexis, and his two daughters, Ava and Julia.  Ava also led the pledge of allegiance and Julia sang “God Bless America.”

The event was dedicated to Julian’s mother, the late physician Emerita Recana.

She described Julian as a loving husband and father who made family his priority. 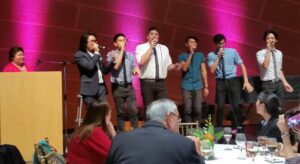 Judge Julian Recana is sworn in by his father, Judge Mel “Red” Recana as his wife Alexis, with daughter Julia, looks on.

“We are very proud of him,” said Judge Tomson Ong, one of the speakers who took turns honoring Julian.

Magno, Ong and five other Fil-Am judges, wearing their black robes, sat in the front row.

Also attending the event were Rachelle Arizmendi, the first non-white and first Fil-Am member of the City Council of Sierra Madre; Gloria Pulido, who represented her husband Mark Pulido, the first Fil-Am mayor of Cerritos; and Consul General Leo Herrera-Lim.

Herrera-Lim said it was a “proud moment” for every Fil-Am. “Pinatunayan ni Julian na kaya ng Pilipino na umakyat, (Julian has proven that the Filipino can rise to the top),” he said.

Christine Gonong, president of the Philippine American Bar Association (PABA), said Julian and the other Fil-Am judges serve as role models for young Fil-Ams who aspire for high positions in government.

Judge Julian Recana is a founding officer of the PABA Foundation and a lifetime member of PABA.

A veteran prosecutor, Recana served as a deputy district attorney for the Los Angeles County District Attorney’s Office since 1999. He was with the Hardcore Gang Division in Downtown Los Angeles, prosecuting violent, gang-related offenses.

He was previously assigned to the Long Beach Courthouse for 11 years, prosecuting murders in Long Beach and parts of Los Angeles.

Gonong described Recana as “a highly effective trial lawyer who has been recognized by his peers as an outstanding advocate… and an exemplary public servant.

Recana received his bachelor’s degree in economics in 1992 at the University of California, Berkeley, and his juris doctor egree from Loyola Law School in 1998. He began his career as a contract attorney at Early Maslach Price & Baukol.

A reception was held at the nearby Walt Disney Concert Hall featuring performances by the famous Fil-Am a cappella group, The Filharmonic, which was recently seen in the movie, Pitch Perfect 2 and the reality show, The Sing-Off.