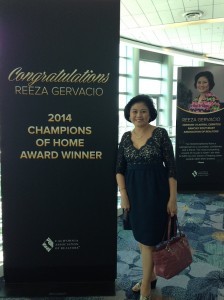 Fil-Am realtor Reeza Gervacio of Cerritos-based Century 21 Astro during the California Realtor Expo 2014 on Oct. 8 at the Anaheim Convention Center.

LOS ANGELES  – A multi-awarded Filipino-American realtor added another feather on her cap when she was chosen by the California Association of Realtors (CAR) as one of only two realtors for the “Champions of Home” Award for “changing their clients’ lives for the better, raising the standards for others, and led by example.”

The award was presented to Fil-Am realtor Reeza Gervacio of Cerritos-based Century 21 Astro during the California Realtor Expo 2014 on Oct. 8 at the Anaheim Convention Center. The other awardee was Lois Gerace of Woodland Hills-based RE/MAX Olson and Associates.

California has over 170,000 realtors and only two were chosen this year to receive the prestigious award, which is now on its second year.

“These two REALTORS® repeatedly have gone above and beyond in service to their clients and have shown care and compassion in making sure their clients’ dreams of owning a home became a reality,” CAR said in a press statement.

“Reeza Gervacio and Lois Gerace are exemplary REALTORS® who push themselves and consistently set higher standards by showing extreme diligence and persistence in serving their clients,” said CAR President Kevin Brown.  “They rise above the rest and set an example to others for their dedication and passion, and I’m proud to recognize them as our 2014 Champions of Home.”

CAR said: “A 16-year realtor, Gervacio also cares about her profession and the community in which she works. She donates her time to local school career days to talk with young children about the profession she loves. In addition to her sales duties, Reeza also helps train agents in her office in farming, client communications, sphere of influence, and how to expand visibility.”

CAR also said giving back to those less fortunate also is important to Gervacio. Every year, Gervacio visits the Holy Trinity Home for Children, an orphanage in Quezon City, and spends time with them, hosting lunch and giving gifts and food items to the children.

Carol Rayburn, Gervacio’s broker at Century 21 Astro said: “We need shining lights like Reeza for whom it’s not just about the money, but about the people she serves.”

In their nomination letter to the Awards Committee, Rayburn and Lou Rosenkranz, co-owner and broker of Century 21 Astro, cited Gervacio’s numerous accomplishments.

“As owners and brokers of Century 21 Astro, we have seen how Reeza evolved from a neophyte real estate agent into one of the top agents of the Century 21 system. In her third year as a Realtor in the year 2000, Reeza earned her first of seven Centurion Awards. In her sixth year in 2003, she amazingly garnered the Grand Centurion Award, the highest possible award attainable in the Century 21 system. And she repeated it two years later in 2005! Reeza also won the Double Centurion Award four times, two of which were during the recession,” they said.

Rayburn and Rosenkranz added: ‘What was even more incredible was that she won one of those Double Centurion Awards in 2010, the year she learned she was afflicted with breast cancer. People of less character would have given up their career in the face of that kind of adversity. But Reeza did not sulk, and instead worked as hard as she had ever done – in between medical procedures and frequent visits to the doctor and the hospital. It was probably the best challenge she had ever had to face in her life and in her career, and she emerged from it with flying colors!”

Poe recalls immigrant life in US