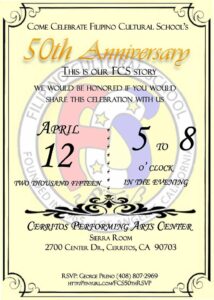 (Los Angeles, CA ) The Filipino Cultural School (FCS) will be celebrating their 50th Anniversary Banquet on Sunday, April 12, 2015 starting promptly at 5:00 pm to be held at the Sierra Room in the Cerritos Performing Arts Center in Cerritos, CA. The celebration will honor the 50 years of existence of Filipino Cultural School via speeches, dance performances, video presentations and entertainment. It will especially acknowledge those who took part in the FCS program in the past as well as those who are actively involved in the program today.

With the growing influence of American culture in our everyday lives, it is easy to forget where we came from and our origins. This growing impact, without a doubt, affects the youth and can easily create a disparity between the American and Filipino cultures. Filipino Cultural School has encompassed and taught the youth the many different aspects of Filipino culture, such as dance, music, history, geography, lifestyle, and language. The school has been running a summer educational program that teaches the youth (specifically ages 5-18) about their Filipino culture. Furthermore, Filipino Cultural School strives to show the different sides of Filipino culture in hopes of preserving the culture for future generations.

Founded in 1965 by the Sampaguita Women’s Circle, the Sampaguita Women opened FCS in the past several years other facilities to accommodate increasing enrollment in the South Bay Area, notably within Cerritos and Anaheim. Dolly Anthony, the first Directress of FCS spent most of her vacation time during the 1960s in the Philippines collecting, books, records, and many other materials needed for the school.

When asked what was her vision of FCS she said, “I saw Filipino Cultural School as a springboard for the Filipino-American youths’ search of identity. Former students who become teachers became role models for the younger ones. These students continue to meet even after the summer sessions and then organize Filipino Cultural Clubs in their respective schools and communities. I want our generations to help one another…”

Due to lack of leadership and possibly the gentrification of organizations such as the Sampaguita Women’s Club to keep the school alive along with other sociological factors, the FCS program was dissolved. However, in early 2013, the spark was re-lit in the hands of college students Czarina De Jesus, Paolo Roca and Rhea Umalin, who collaborated together to get the program running again. “It was challenging at first to set up FCS, from outreaching to deciding on which topics to teach, from getting students and volunteers”, says co-President Paolo Roca, “but it all ended up working out especially with the support of the community, parents, volunteers and the FCS Board.

This is a program that a lot of people are passionate about and that’s why it went through and will continue to improve as the years pass.” Having high ambition and passion, the executive board recruited many teachers and volunteers from various educational institutions, such as the University of California Los Angeles (UCLA), Cerritos Community College, Lakewood High School and Cerritos High School. With young and stellar individuals as volunteers and teachers, the program was set to re-launch for the summer of 2013.

Filipino Cultural School will be celebrating the milestone of its 50th Anniversary this year. From the current Internal Vice-President of FCS, George Preno, “It’s a milestone because our board and the leaders before us have been continuing to address a need to engage and educate students about the importance of the Filipino Culture. Fifty years marks 50 year’s worth of passion and effort to ensure that students know where they come from and why that’s important for them.” For Erika Castro, current Volunteer Coordinator, “FCS used to be led by the older generation, but has recently transformed into college and post-grad students educating the youth about the Filipino/Filipino-American identity and culture. This program is standing strong thanks to the passion and dedication of the past and present FCS community, including students, parents, volunteers, and alumni. Anyone who has been involved with FCS at some point in their life has played such a significant role in this program that this milestone truly deserves to be honored and recognized.”

Six Tips for a Healthier “Fresh From the Dentist” Smile